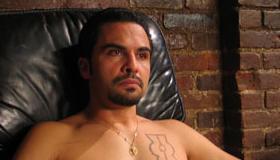 Issues almost take a back seat to friendship in this low-key piece about a working-class fella from Queens, New York, and his relationship with an illegal Mexican immigrant. The title suggests shotgun cross-culturalism and, indeed, the movie’s different modes and moods don’t cohere naturally. The slacker charm of screenwriter and star Carmine Famiglietti—who drew on personal experience—counteracts some but not all of the artificiality in the King of Queens meets Babel narrative. It will resonate in communities where the immigrant population, especially Hispanic, continues to rise, which means everywhere in the country. Yet Amexicano won’t get much of a chance in a theatrical setting since an extremely limited release is planned.

World-premiered at the 2007 Tribeca Film Festival, the picture would have been at home amongst the many similar-themed works in Tribeca’s 2008 lineup, most of which were flashier and more aesthetically advanced. We aren’t given any background on portly protagonist Bruno, other than that he’s unemployed, a bit of a loner and a fourth generation Italian-American. Until the final reel when the action switches to the U.S.-Mexico border, Famiglietti and director/producer Matthew Bonifacio aren’t concerned with putting the story into a larger, global context. Had they stuck with the interpersonal dynamics and not introduced stock, melodramatic turns of events meant to illuminate the immigrant’s plight, Amexicano would be stronger.

Physically at least, Bruno does resemble Kevin James from the sitcom. While not the most energetic guy around, he’s decent. Unemployed and behind on his rent, without rushing to find work, he’s spurred into action by his landlord Alex (Michael Aronov). In lieu of rent, Alex hires him to do small, two-man construction jobs such as putting up a backyard fence and re-tiling a bathroom. To find a helpmate, he sends the suspicious, mildly prejudiced Bruno to a street corner where Latino day laborers congregate. Diego (Manny Perez), the first laborer he hires, is clearly trouble, but on day two he finds Ignacio (Raul Castillo). Despite the language barrier, they work well together and hit it off personally. Bruno even teaches himself a little Spanish using a website called “Bobby Buenos.”

Soon he meets Ignacio’s wife Gabriella (Jennifer Pena) and becomes a close friend of the handsome, industrious couple, who represent an immigrant ideal. Eventually, he becomes “the gringo on the corner” standing alongside Ignacio as they hustle for jobs. The contrast and friction between Ignacio and Diego, who has his citizenship, is heavy handed, as are the plot turns crammed into the movie’s last third following a slow start. Bruno has a few funny, offhanded asides that edge things toward comedy; and then come wisps of romance, an act of violence and tragedy rendered with realistic, straightforward cinematography and production design. In general, the movie has the friendly openness of Famiglietti’s face. All three of the leading characters project vulnerability and an aura of simplicity bordering on naïveté that suggests loyalty and a strong work ethic aren’t enough to protect one from harm.

But rather than say anything novel about the immigrant experience or dramatize the particulars of the struggle to succeed in the melting pot that is the United States, Amexicano exposes the reality that a tiny fraction of Americans can be considered native. The vast majority of us, if not immigrants ourselves, are descendants of people who came from other places seeking a better life. It’s a lesson brought home to Bruno and one he embraces.