close
Add Appaloosa to the list of successful modern westerns 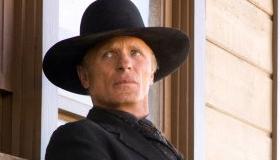 The wide open spaces of 1882 New Mexico serve as the backdrop for Appaloosa, a riveting Western tale of violent frontier justice and offbeat romance. Star Ed Harris worked with co-writer Robert Knott to adapt Robert B. Parker’s novel and steps behind the camera to direct for the first time since 2000’s Pollock, producing a picture characterized by panoramic vistas and a top flight cast that includes Harris’ A History of Violence co-star Viggo Mortensen. Renee Zellweger and Mortensen decorate this suspenseful drama that evokes memories of classic Westerns as well as more contemporary oaters, such as Kevin Costner’s Open Range. Solid reviews ought to attract genre fans and mature audiences, ensuring moderate box office success, although solid word of mouth could expand its reach beyond that base.

Harris is clearly the lead as marshal Virgil Cole, but the film’s viewpoint belongs to Mortensen as Cole’s longtime friend and deputy Everett Hitch, who narrates. Itinerant lawmen who have been partners for a dozen years, they come to the mining community of Appaloosa at the request of the city fathers. The old marshal is missing and presumed murdered, his killer assumed to be sardonic rancher Randall Bragg (Jeremy Irons), a transplanted New Yorker rumored to have powerful political connections.

As Cole and Hitch set about laying their trap for Bragg and taming the town’s wilder elements by applying their own brand of brutal justice at the barrel of Hitch’s eight-gauge shotgun, newcomer Alison French (Zellweger) blows into town. The West Point-educated Hitch may be younger, better educated and hotter than his shy, taciturn partner, but it’s Cole who attracts Alison. He represents security to the woman with only a dollar to her name, and Cole responds in kind to her warmth and charm. Hitch only sees the danger in the growing relationship, as he distrusts both the woman and Cole’s sudden desire to put down roots—a move that makes him suddenly vulnerable.

Within the context of the campaign against Bragg and his men, there is little new in Appaloosa. Irons is terrific as the sophisticated psychopath, but other than that polish, Bragg is virtually interchangeable from any number of Western villains from Pa Clanton in any version of the Wyatt Earp/O.K. Corral story to Lee Marvin as the titular killer in John Ford’s The Man Who Shot Liberty Valance to Gene Hackman as the vicious town boss in Clint Eastwood’s Unforgiven. It is the romance that sets Appaloosa apart, both in the way the relationship alters Cole and Hitch’s friendship and their approach to the law and in the way the love story eventually evolves when it becomes clear that there are more layers to Alison than a straight-shooter like Cole could ever anticipate, as she reacts to exigent circumstances in ways that shock even the worldly Hitch.

Much as Alison’s relationship with Cole rocks his world, so it also throws a curveball into a story that might otherwise be a routine—if involving—Western. Appaloosa is a handsome production, as Harris and director of photography Dean Semler make sublime use of the anamorphic widescreen frame to capture the wild glory of the New Mexico locations. And Harris cast it well with faces that look straight out of the 19th century and belong to some of the finest actors working today, including in addition to the four leads, Timothy Spall and James Gammon as town leaders and Spanish actress Ariadna Gil as Hitch’s working-girl love interest Katie. But in the heavy-handed way that Harris ladles on composer Jeff Beal’s overblown score there are hints of what a mediocrity Appaloosa might have been had he been working in a more strictly traditional story. Alison French and her sweetly wanton ways change all that, adding a bit of welcome kink and putting the “wild” back into the west.