close
Bangkok represents more of the same for Cage 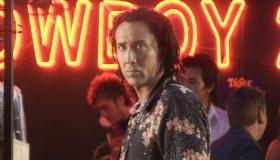 It’s been 10 years since Nicolas Cage was a box office draw—a prestige version of the Joker who had the brains and sleaze to make Face/Off a hit. Since then (with rare exceptions like Adaptation ), he’s gone inward and flat, taking on repressed meathead roles where he shoots often and smiles little. Cage was the driving force behind resurrecting brothers Oxide Pang Chung and Danny Pang’s 1999 hitman flick, but the combination of hyper-gritty locale and shoot-em-up fireworks that drew him in isn’t likely to draw much interest from audiences already burned out on his favorite things.

The only difference between Cage and action heroes like Jason Statham and The Rock is he gets cast as a tortured soul; still, the only real agony is his increasingly ridiculous hair. Here, Cage plays Joe, a world-weary assassin for hire with a specialty in high-profile targets like gangster kingpins and informants in police custody. His current gig is a four-hitter in Bangkok that’s not supposed to be much different from his usual script: get in, hire a lackey, kill everyone, kill the lackey and leave. His employers, a family-man thug named Surat (Nirattisai Kaljaruek) and the token Asian blonde (Dom Hetrakul) aren’t even supposed to know his name, though like him, they’ve got their jitters and suspicions. When he sees a young hustler named Kong (Shahkrit Yamnarm) picking the pockets of western businessmen, Joe hires him and immediately orders the heroin to off his employee when the dirty deeds are done. But then Nic falls under the spell of Bangkok for two reasons: its elephants, which wander behind him down crowded market alleys and watch over him like impassive angels, and a lovely deaf-mute pharmacist (Charlie Young) who gets under his skin simply because to communicate, he has to take off his motorcycle helmet and invite her to stare in his eyes and touch him softly on the arm. (Like New York filmmakers going to Kansas and discovering cows, the Pangs are content to exoticize their own country as a buffet of street food, Buddhist statues and endless stripper conga lines.)

The Pangs’ all-Thai original version was a tale of revenge. Kong was the focus (and the deaf-mute)—the story was about his soundless, shockless isolation slowly breached by his hitman mentor Jo and a gentleman’s club dancer named Aom (here played by the tough sprite Panward Hemmanee), only to find himself hollowed and angry when Jo is murdered by his employers. Screenwriter Jason Richman has retooled the story to focus on Cage’s white man’s burdensome moral awakening, but the film’s too stylized for its near-invisible sentimentality. The cinematography is bleached and muddy, as though the film stock was washed in a desert rainstorm. All that pops out are Cage’s ink black hair and the shadows circling everyone’s eyes.

In the years since Cage stopped smiling, his face has grown heavy, lips hanging like tubes of cement—an anti-charisma where even speaking seems like an effort and we nearly feel its an honor when he deigns to mumble. Never has one actor charged so much for exerting so little. His Joe is a cipher. We have no sense of why he kills for a living, except that nothing makes him happy, so why not be miserable with a decent paycheck? (Though the money feels incidental.) In short, he’s a screenwriter’s concoction, an empty vessel filled by our need for bullets, executed by an actor who makes audiences so lethargic, we crave explosions. Just another cycle of bombast and boredom.