close
Pay attention to that man behind the curtain 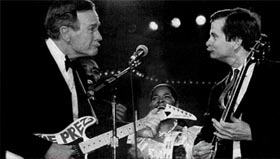 Chronicling the rise and tragic fall of Republican operative Lee Atwater, who helped engineer the campaigns of Ronald Reagan and George Herbert Walker Bush, among others, the unfortunately titled Boogie Man (it’s a horror film only if you’re a Democrat) is not only a fascinating political documentary, it also serves as a primer on how the GOP is still running things. This painfully honest look at a Southern boy who rose from the Young Republicans to the inner circles of Washington power circles is being released on a week-to-week basis in a few major cities before the November election. Due to its nature, its box office prospects are likely weak, but if word gets out, it could cash in on election fever and rope in some true believers on both sides, perhaps even drawing Oscar’s attention.

The film is a mesmerizing look at Atwater, a guitar-playing blues aficionado who wrote the Republican playbook on dirty campaign tactics and was one of the most highly successful spinmeisters who ever played the D.C. game. He mentored the likes of Karl Rove and George W. Bush while playing key roles in salvaging the presidential runs of Reagan and the elder Bush. He was rewarded for his dubious efforts by being named Chairman of the GOP.

The film is laced with interesting interviews from many who crossed paths with Atwater including Rove, Mary Matalin, Sam Donaldson, Newsweek’s Howard Fineman, current McCain staffer Tucker Eskew and many others. Best of the bunch though is Ed Rollins, a senior operative who took Atwater under his wing only to be stabbed in the back. His observations are priceless and delivered with the kind of steely irony and insight only the most seasoned insiders could muster. Also getting lots of face time is 1988 Democratic Presidential nominee Michael Dukakis, who had the unfortunate experience being right in the eye of Atwater’s political storm, an effort that saw Lee’s client, George Bush Sr., swept into the White House by going negative and practically making a paroled rapist named Willie Horton seem like he was Dukakis’ running mate.

What’s most remarkable about this sensationally entertaining doc is how it reflects a philosophy practiced by Atwater and handed down to others still working on GOP campaigns today. He was called the “charming yet Machiavellian godfather of the modern negative political campaign,” a “political assassin” and “the most evil man in America,” but there was method to his madness and his technique of hardball—even blatantly dishonest politics worked and, in effect, changed the course of the country.

Using plenty of old news interviews and campaign footage interspersed with new footage and talking heads, writer/director Stefan Forbes has crafted one of the most useful and eye-opening political documentaries of our times. The sad, and some might say inevitable cruel fate life had in store for the ever-youthful Atwater is also shockingly documented with the ironic comment from Rollins that “Lee was spinning right to the end”.

A must for political junkies and anyone interested in the inner workings of the way we elect presidents.