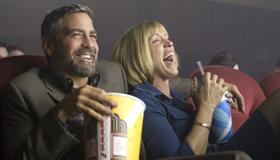 Like gymnasts stretching their quads, Joel and Ethan Coen alternate between comedies and dramas, their films unified by sharp dialogue and high body counts. No Country for Old Men was lean and devastating—a shark chasing prey. Out of boredom, restlessness or a need to unbalance their audiences, the Coens’ follow-up is a bumbler, its first half as aimless as a drunk spider making threads without plotting a trap. But nearly an hour in, one bloody shock yanks the film together—a hat trick they must have loved scheming as much as their five-star actors loved bringing it to life. Audiences won’t have quite as much fun as the production team did, but smaller filmmakers wouldn’t be ashamed to list this trifle on their resume.

Frances McDormand and Brad Pitt play Linda and Chad, two mouth-breathing gym employees who left their brains on the Stairmaster. Lovelorn Linda is obsessed with dating site BeWithMeDC.com, but wants liposuction, breast augmentation, rhinoplasty and a facial tuck to lure in a higher class of men than government drones with zero sense of humor. Pitt’s Chad is an ambiguous metrosexual/homosexual airhead with horrendous guylights and the depth of the Energizer Bunny. When they seize onto a CD packed with CIA info and suspicious sequences of digits left on the changing room floor, the best friends are certain they can play Good Samaritan and blackmail its owner for at least enough cash to kickstart their lives’ second act.

The disc belongs to Osbourne Cox (John Malkovich), a just-fired agent channeling his explosive temper into an explosive memoir. Kinda. He’d rather get drunk watching Family Feud than write, and it’s doubtful he even knows much of interest. Osbourne doesn’t even know his wife Katie (Tilda Swinton) is cheating on him with cranky, sloppy lothario Harry Pfarrer (George Clooney), himself married to children’s book author Sandy (Elizabeth Marvel). Cox is a mewling kitten in the DC lions’ den; still, when Chad and Linda confront him with the disc, it’s a rout. Chad skulks off with a busted nose, and Cox has a few sweet minutes of feeling like a man. But the gym rats are too dumb to quit, and their persistence eventually escalates into a reason for us to start paying attention after lazily zoning out on the Coens’ throwaway quips and cineaste fetishes. (Here, the brothers geek out on footsteps like John Ford used horse gallops, in one scene tracking a sharp pair of dress shoes as they tread carpet and clatter on tile.)

The Coens seem to be using Burn After Reading as a pressure valve to release the high expectations after winning four Oscars. Surely, they know that characters are more then a need and a tic. But that’s all each of their pedigreed actors are given (not that Pitt seems to mind—he dances in the car like he’s having the time of his life). Clooney’s merely a lactose-intolerant horndog; Malkovich, a sodden twit with pretentious French pronunciation. McDormand is shrill and avaricious—Steve Buscemi could play her with a wig—and Swinton is cast as another one of her stone-cold ball-busters, though it’s generous of the Coens to play the eerie pale planes of her face as a mantrap, which as the Brit press knows well, it is. Ultimately, there is no point to their little slapdash characters other than to note that violence is even worse when the victims and instigators are idiots. Worse than death is dumb death, when people on both side of the gun can’t explain why. Ignorance is bliss only so long. But as these hapless characters are spying on each other, they’re being spied on—it’s a binocular circle jerk. And outside it all, knowing all and caring little, are us and the CIA, a cathartic, audience-exculpating entity represented by G-Man J.K. Simmons, who snorts when his agent fills him in on the Coens’ petty but bemusing melodramatics, and when asked what it means shrugs, “F--k if I know—I guess we learn not to do it again?”