Callback: The Unmaking of Bloodstain 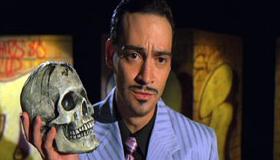 The fictional filmmaker of the movie-within-the-movie Bloodstain may insist that the secret formula for succeeding in Hollywood is made up of about “80 percent dumb luck,” but this modest satire of the random intersections of the talented (and the not-so-talented) in Tinsel Town that result in fame (or infamy) is a nice comedic calling card for a trio of relative unknowns who seem smart enough to make their own luck. None of them will likely get rich off the box office receipts this time around, but in these uncertain financial times self-releasing Callback: The Unmaking of Bloodstain seems as sound of an investment in their futures as any.

Co-written by producer/director Eric Wolfson and actor Michael DeGood, Callback is the tale of—perhaps not so surprisingly—a trio of relative unknowns trying to succeed in Hollywood by any means necessary, whether by accepting an audition offer from an unsatisfied phone-sex client, convincing a loan-shark/indie-producer uncle to dole out a perfunctory part or  refusing to take meds prescribed for schizophrenia? The last strategy is the one employed by brand-new LA arrival Tony Shamus (Jeff Parise), a recently released mental patient whose inner voices seem much better at delivering lines. The first is the secret to the big break of Peter (Johnny Moreno), a good guy and a classically trained actor whose “motivation” for his voice-over  er, “vice-over” work is the need to pay the rent.

And the second  well, that’s the approach of Carl Simple (co-writer DeGood), a full-time enforcer and part-time mugger who stops in the middle of foot chases to rip flyers advertising for understudies off bulletin boards. Carl’s dim misunderstanding of an empty line of consolation from his Uncle Duffy (Darrin Reed), that the competition for the lead in Bloodstain had come down to him and one other actor, sets in motion the comic calamity that threatens to turn the set of the low-budget cop drama into a real-life crime scene.

Although it’s not likely to make household names out of anyone involved just yet, Callback: The Unmaking of Bloodstain is a showcase for promising small moments that capture the desperation of aspiring actors in Hollywood—including a hilarious scene in which Peter tries to deposit a handwritten IOU into an convenience-store ATM machine.