close
In this offbeat comic gem, actor-director Clark Gregg and Fight Club novelist Chuck Palahniuk go to the other side of the id 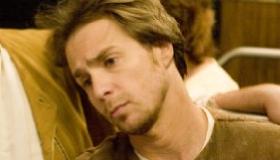 Choke is another weird fable about masculine identity from Fight Club novelist Chuck Palahniuk, brought to the screen by actor-turned-director Clark Gregg in a tone that could be called “screwball raunch.” Where Fight Club asked if it’s possible for men to define themselves in a modern world that has no room for their drive toward violence, Choke focuses on the other side of the male id: sexual adventurism, as embodied by Victor Mancini (Sam Rockwell), a “historical interpreter” for a colonial museum-cum-theme-park and a man deeply addicted to sex. Like Fight Club, it's a thought-provoking work with narrow general audience appeal. Unlike Fight Club (which failed at the box office before finding an enduring audience on DVD), Choke is also a film with a modest budget whose distributor actually knows they've got a cult title on their hands. Expect everyone involved to do a better job getting the word out and an appropriately-scaled audience into the moviehouse, using Fight Club and a new soundtrack by indie rock legends Radiohead as sells.

As defined by Choke, a sex-addict is someone who has to do it—compulsively and usually perversely—no matter where they are or what the risk. As in Fight Club, Victor resorts to a customized 12-step program, but he’s stuck on step three because of intimacy issues that can only be eluded by a quick relapse into orgasm’s endorphin rush.

Most of Victor’s problems flow from his complex relationship with his mother (Anjelica Huston), a sociopathic nonconformist now hospitalized in the early stages of dementia. In Victor’s childhood, Mom was constantly stealing Victor from foster homes and forcing him onto the road to share her manic exultations. Victor both adores and reviles her, and he’s never forgiven himself for the way he escaped her: by intentionally choking on a meal in a public restaurant, using the attention this drew to get mom nailed for kidnapping. Twenty-plus years later, Victor is still choking on food in public places—a con artist’s scam to fleece the good Samaritans who take a parental interest after they save him, but also a metaphor for his still-stifled life. But then his mom’s new doctor turns out to be a beautiful woman (Kelly Macdonald), and Victor is forced to confront all his fears of intimacy and the misshapen nature of his emotional life.

Choke traces Victor’s comedic journey with an unrepentant libertine panache worthy of Aristophanes, François Rabelais or Henry Fielding. Where Fight Club director David Fincher gave a glistening noir sheen to Palahniuk’s comedic visions, Gregg opts for sitcom sunniness, as if to say that Victor and his hilarious sexual adventurism aren’t as weird as we take them for. In Choke, sex is inherently ridiculous, perversion isn’t oddball stuff but a universal human principle and Victor is far more an everyman than he is a de Sade.

Gregg is aided in achieving this oddly uplifting viewpoint by the great Sam Rockwell, at last allowed to hold the screen again in a movie tailored to his special gift. A brilliant comic actor rather than a comedian, Rockwell is able to move from farce to drama without letting you see the shifts. There’s a danger and magnetism in those hangdog eyes that makes Rockwell work as both blue-collar Don Juan and Fate’s punching bag, and his range and focus are critical to keeping Choke ’s diffuse blend of satire, sexual burlesque and Freudian melodrama from flying apart.

There are quibbles to be made about Choke here and there—budgetary seams that show, inelegant transitions to and from flashback scenes and Anjelica Huston’s oddly stagy dialogue as an arch character that might be easier to swallow if Julie Christie hadn’t just depicted a similar mental degeneration in Away from Her with such naturalistic grace. But Choke ’s virtues far outweigh its flaws. Gregg has achieved something unique—part Wes Anderson, part Mel Brooks—and a rare American comedy that is simultaneously brainy and unafraid to be in touch with the human body. Choke doesn’t always go down easy, but there’s a cult audience out there that certainly won’t want to spit this one out.