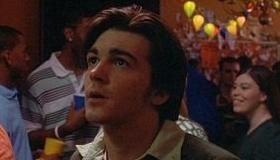 All the embarrassments and insecurities of college life are put to mediocre effect in the new, aptly titled film College. Studying—or any form of real education—takes a back seat to drinking, nudity and a succession of scenes aimed at making the audience squirm in disgust. College is clearly aimed at younger moviegoers looking to have a good time, but the film’s cheap look, small-market presence and pedestrian execution all guarantee that kids will stay away in droves.

To start the long list of clichés is Kevin (Drake Bell), a geeky high school senior who is faithfully accompanied by his two best friends Carter (Andrew Caldwell) and Morris (Kevin Covais). This being a bad imitation of far superior teenage fantasy movies, College commits the obvious mistake of making Kevin’s best friends movie clichés, too. Carter is the obese and obnoxious one, whose horniness is only rivaled by his appetite. Morris is the uber-nerd, extremely sensitive and put onscreen to make our “hero” Kevin look less geeky in comparison.

For a movie titled College, it’s a bit bizarre to have the story start in high school, where we meet the three aforementioned seniors. After declaring themselves too boring and un-cool for their high school peers, they do what any movie cliché would do, take a trip to a place where the women are more beautiful, the beer flows freely and the three geeks can find their inner badasses. In this case, that particular paradise would be the closest college campus, and once they arrive, they waste no time getting into all kinds of telegraphed trouble with one of the fraternities on campus.

Anyone with half a brain can predict the geeks will have to use their brains to get out of trouble and win over the ladies while the jocks immaturely sneer with an extra upgrade of asshole. If College were to take these standard clichés and at least have some fun with them, it would make for a fun and brainless time at the movies. But instead director Deb Hagan and screenwriters Dan Callahan and Adam Ellison decide the best way to approach worn-out material is to make it even less fresh than before. There are crap jokes, puke jokes, nudity and—at one point—the high school outcasts even do body shots off the hairiest member of the fraternity. None of it is subtle or unique, just more of the same with a less-experienced group of filmmakers putting on the show.

College even has the audacity to blatantly put a John Belushi clone in the middle of a scene for no apparent reason other than to acknowledge the genre they’re destroying (or celebrating, depending on your point of view). With sloppy direction, a half-baked script and no reason to care, College is far from being the Animal House of this generation.