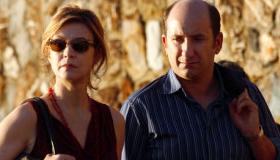 From afar, the onslaught of picturesque views of Genoa steals one’s wind. Meanwhile, in the rough-and-tumble cobblestone streets lies a world that is far from ethereal. In Days and Clouds, filmmaker Silvio Soldini exposes close-up the dotty mess of this impressionistic setting, where a married couple are trying to avert financial ruin while salvaging what love they have left. Clichés and predictable melodrama are refreshingly cast away. Delicately, the film slides down into this somber inferno only to clench a pinky-hold on the edge that is just enough to avert oblivion. While many Europeans will be in for a feast, not enough domestic cats will opt for the rich palate that this movie boasts.

Acing her dissertation about the prospective discovery of a famed artist’s fresco in a remote palazzo before a wowed faculty, Elsa (Margherita Buy) is riding high. Toasted by her friends at a party in her honor, the future looks bright for the graduate. Once you see her husband Michele (Antonia Albanese) cower in the bathroom while his wife performs lusty karaoke, however, you realize quickly all is not tip-top. Fact is, Michele has been unemployed for months; the entire time, he withheld the bleak truth of these money woes from Elsa. Without money, they are down and out and must shake up their life as they know it. After losing the house, Daisy the maid and the planned romantic trip to Cambodia, the pair’s performance maintaining the status quo sours, too. The agony of defeat becomes too much.

The couple’s relationship troubles are far from dire at first. In some regard, the film reveals how, with more time and honesty, bonds tighten in ways that were not so plentiful pre-fall. But desperate times get the better, and the husband pawns his wife’s priceless works and that oath of trust begins to quickly unravel. Not much out there to turn to, either. Friends who owe Michele some loot act as if they paid their debts, and back at home Michele is stagnant without a move to make. He’s not even on the board. He quotes, “I don’t earn.” It becomes clear their pretty past is just that—a memory.

Elegant and intricate, the film touches several nerves. The writers and the director do so many things right. They take the characters and all of their infractions and try to show them in an honest light. Nothing is forced, and the acting is just as sunny. So too is the camera, quite close whenever fits happen or when a lead is about to trip up for the worst. Near and far, nothing is neat anymore. And perhaps that is the point. That the lives we live are imperfect and cannot stay on the page as oils or acrylics do.