close
Eye is a diverting timewaster 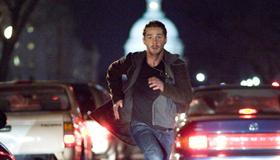 Director D.J. Caruso and actor Shia LaBeouf spun Disturbia, a slight tech-savvy thriller about a teen who spies on his potentially murderous next door neighbor, into a solid stealth hit helped by great word-of-mouth buzz and a script rooted in Hitchcock’s Rear Window. Steven Spielberg signed on to executive produce their follow-up, and as to be expected, its scope has widened exponentially from a suburban block to the whole freaking world. The film accomplishes less with a hell of a lot more; where there was one stabbing and a handycam, now there’s car crashes, explosions and frightening access to everything that bleeps from cellphones to electronic billboards. Though it even boasts a train wreck, it’s not one itself, just a diverting timewaster that deserves decent receipts and a short lifespan.

LaBeouf stars as Jerry Shaw, a Stanford dropout only dimly aware that he’s surrounded by a brave new world of spy tech where men on one half on the globe can guide an unmanned plane to search and destroy their enemies. As Bruce Wayne noted, we civilians have invited in these peeping toms by gluing cellphones to our hips. And one fateful day, both Jerry and single mom Rachel (Michelle Monaghan) answer their phones to hear a droll stranger barking out orders that they must follow—no questions asked. “Desertion is not an option,” it drones—the fallout is life in prison or the death of their loved ones. The actress playing the voice is uncredited, but I bet a bagel sandwich it’s Tracy Grandstaff, the voice of Daria. Like that apathetic Gen X teen, the voice, even when aiding the pair in escaping 10 cop cars or breaking out of a maximum security holding cell, sounds as blasé as a slacker dissing the new Soundgarden album. At its worst, say when ordering Jerry to plummet off a tall building, the voice is a shaming mother sniping, “Just jump”—it’s so emasculating it’d sharpen Freud’s pencils.

Caruso’s slick pulse racer is fueled by paranoia. It’s a nervous, twitchy film that races rather than catches its balance. Screenwriter Dan McDermott and his fleet of three co-writers benefit if the audience shuts off their brains and speeds on cruise control; once they catch their breath in the parking lot, the plot collapses. The voice wants Jerry and Rachel to execute a crime it cannot. So its first move is to get them both in trouble with the military, represented by Billy Bob Thorton and Rosario Dawson. Wouldn’t off-the-radar stealth be smarter? Their best argument for the blackmailer roping in Rachel is that her son plays the trumpet. Still, even though the first couple dominoes make no sense, once they start tipping, the best decision is to mindlessly, grinningly follow suit. As in Disturbia, Caruso slavers to rise his material above the action-adventure mill by linking it to Hitchcock, here layering it with the pace of North by Northwest (though without Cary Grant and Eva Marie Saint’s combustive chemistry) and mimicking its infamous crop duster chase sequence. But as the car crashes stack up, Caruso’s lazy allusions to the movie he wishes he made only diminish the movie he actually did. You can’t help thinking that if Hitchcock were inspired by today’s privacy meltdown, he’d need only a quarter of the explosions to leave us shattered.