Everybody Wants To Be Italian 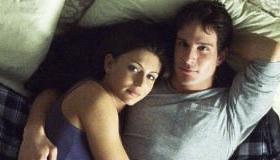 Everybody Wants to Be Italian wasn’t filmed in Odorama, so all there is to go by is the slovenly look of the fish shop owned by its main character Jake (Jay Jablonski), but one suspects that the merchandise smells a little  well, fishy. A similar scent emanates from this modest romantic comedy that—once again, one suspects—was inspired by the success of the ethnic charmer My Big Fat Greek Wedding, but whose on-screen central couple and off-screen writer/director are not, by their own admissions, Italian. Ultimately, there are just too many fish in the sea for this floundering rom com to attract Big Fat audiences.

The loud-and-proud Italian-Americans who work in his fish shop would prefer to pronounce it “Bianchi,” but Jake’s last name is actually “Bianski.” An amiable entrepreneur, Jake is still in love with Isabella (Marisa Petroro), the woman who dumped his ass eight years earlier after he had a threesome with her sister and her best friend—in her parents’ bed. Though it seems almost blasphemous to slap the label “romantic” on a guy with that particular bullet point on his C.V., there is no other word to describe the starry-eyed determination with which Jake continues to pursue his “soul mate” Isabella—who is, it should be noted, now a married mother of three. Oh, wait  yes, there is: “stalker-esque.”

Anyhow, in an attempt to help their buddy/boss get on with his love life, countermen Steve Bottino (John Kapelos) and Gianluca Tempesti (John Enos III) convince a lovely veterinarian named Marisa (Cerina Vincent, who was—fun fact—once a Power Ranger)—who they happen to meet-cute when her cat, attracted by the stench of the fish heads, runs under the dumpster in back of the shop—to come meet Jake at an Italian-American singles event. This, even though—to repeat—Jake is not Italian, and neither (shocker!) is Marisa. Oh, however can the mutual lust of two hotties surmount this seemingly insurmountable obstacle of non-Italian-ness?

If this all sounds like the set up a rom com that’s more of a “dated movie” than a “date movie,” it is. That fishy smell? It’s a sign that this merchandise is well past its sell-by date.