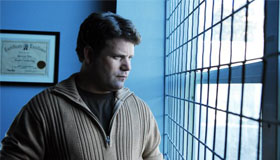 A queasy mixture of Generic Teen Athlete Movie and “there’s no such thing as a bad kid” uplift, overlaid with a veneer of father/son angst and some New Zealand mysticism(!), director Ryan Little’s look at high school rugby subculture is the kind of film that gives the word “forgettable” a bad name. Solid performances by a better-than-necessary cast can’t save a story that was laughably clichéd and cornball when it was first filmed with Spencer Tracy and the Dead End Kids; commercial prospects seem necessarily wispy, although given the fact that rugby is (we are assured) the fastest-growing sport in the U.S., this could conceivably find a niche in home video.

Sean Faris (who comes off here as a roadshow version of the young Tom Cruise) stars as Rick Penning, a teen jock/party animal who seemingly has it all—good looks, a hot girlfriend, a father (Neal McDonough) who coaches his high school rugby team, and a devoted mom (Julie Warner) who doesn’t seem all that upset when he racks up his second DUI and gets shipped off to an out-of-state juvenile detention center. Upon arrival, he’s befriended by prison warden Marcus Tate (Sean Bean) who offers him the chance to shorten his stay and make it back to school in time for the playoffs; the catch is that he has to join a rival team, Highland Rugby, whose coach (Gary Cole as the real life Larry Gelwix) is one of those annoying sticklers for honor, discipline and no sex before a game. Rick is reluctant at first, but Gelwix ultimately wins him over, and after the usual highjinx and tribulations—including the surprise death of a teammate (yes, there’s actually a Gipper character, although thankfully nobody actually says “win one” for him) —the whole thing winds up in a climactic clash between Highland and Rick’s old teammates (who we know are evil because they drink a lot of beer) with a crowd of hundreds in attendance.

Screenwriter David Pliler doesn’t even really try to breathe life into the stock characters and situations, and director Little doesn’t add much to the proceedings either; the big game finale is underwhelming emotionally (blink and you’ll miss the reconcilliation between Rick and his clueless tight-ass dad) and visually somewhere between incoherent and inert. There’s also a perfunctory romance between Rick and a teammate’s good-looking sister (by perfunctory we mean he gets a peck on the cheek at the end) and, in the film’s one teensy stab at originality, the Highland players break into the lingo and dance routines of 19th-century Maori warriors seemingly at the drop of a hat. Mostly that comes across as unintentionally amusing, but the film is otherwise so dull that by the third or fourth time the kids start doing guttural native chants you’ll probably be grateful for the laughs.