close
While not a masterpiece, Forgiveness deserves credit for sticking its neck out to expose the truth 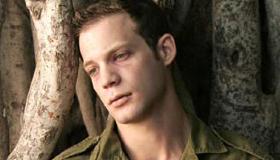 Writer/director Udi Aloni explores the refracted and disjointed identity of Israel and the Jews who patrol it in this psychic opus. On the ruins of a demolished Palestinian town lies an insane asylum largely housing Holocaust survivors. This is where protagonist David (Itay Tiran) is taken after an on-duty accident threatens his sanity and opens him up to the maelstrom of mental trauma. Box office prospects for this film are small given its highly niche subject matter, but the film’s laudable attempts to encompass the far-reaching quagmire of Jewish tribal identity, politics and psychology could have a profound effect on the audiences who do find it.

Angry and unsure of his place in the world, New Yorker David has decided to defy his father by enlisting in the Israeli Army. He encounters other soldiers who fall more towards “normal” on the psychological litmus and clearly doesn’t identify or agree with them, though the camaraderie is strong. While on patrol, David accidentally kills a Palestinian girl and the experience wounds him profoundly. To say David’s reaction is psychological is reductive, as the troubles he endures resemble less the raving delusions of a madman and more the history-riddled assaults of a legacy of torture and danger occurring all at once. For treatment, he’s sent to the aforementioned mausoleum/asylum, where the delusional patients are encouraged (as therapy no less) to dig up the relics and bones found in copious supply on the property. In tandem to this form of practical therapy there’s a psychiatrist who, while caring, also bandies in well-intended and highly experimental methods to cure his prophetic/deranged wards.

Generally, when a character in a film enters a flashback or another mental state, the delineation between the world as seen by the character and the world as it appears to all is made fairly evident. If imperfectly presented, it’s clear Aloni is functioning with a different philosophy in mind. The various realities presented in and by the characters in Forgiveness happen simultaneously inside and outside of time. They’re all as literal as they are metaphorical, and each action—particularly those actions in the film carrying the most emotional heft—are ritualized and spectral. The film’s repeated jumping in time only stands to affirm this idea. Ironically, the events that transpire in New York are somehow less credible than all the ghost stories in Palestine, and that invests a degree of perpetuity to the notion that, as an identity, the survivors (both those Holocaust survivors living at the asylum and David, who is surviving a more modern fissure) are united by their shared tragedy and the guilt that often accompanies it.

While many moments in the film enter the Bollywood realm of random song/dance/fantasy, in Forgiveness, these moments of circus-like theatricality amount to creative risks. Ultimately, the film’s accumulated risks are striving towards a strong, if disjointed sense of poetic truth. To some viewers, these risks may prove alienating. If all that we see in Forgiveness amounts to illusion, then that illusion is the most reliable means we have of accessing the identities and histories built from the long tradition of suffering associated with the terrain. As Aloni suggests, understanding this quagmire is tantamount to madness, and this madness can only be handled via the forgiveness prescribed by the film’s title. Though tricky and sometimes perplexing, Forgiveness is seldom muddled and always sticking its neck out to reach toward some, if manic, exposition of the truths that lie beneath.