close
Everybody comes to Ruza’s 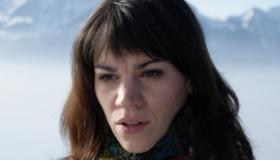 A downbeat slice of life about two generations of emigres from the former Yugoslavia, director Andrea Staka’s Sundance selection is the kind of film that’s easier to admire than actually enjoy. Strong performances and effectively moody cinematography keep your interest, but given the overall bleak tone it’s unlikely to register outside the arthouse circuit.

The film centers on three women, the central focus being Ruza (the excellent Mirjana Karanovic), a perennially rumpled sort who left Belgrade for Zurich 25 years ago and now runs a blue-collar cafeteria that serves as the sort of down-market Rick’s Cafe Americain of the piece. Ruza, like almost everybody in the film, is damaged goods; her life is orderly but about as joyless as you can imagine, including de rigeur pointless sex with a shlumpf of a guy she doesn’t much care for. Much the same can be said of Mila (Ljubica Jovic), one of Ruza’s waitresses, who dreams of returning to a beautiful house on the Croatian coast but is mostly saddled with a lout of a husband (at one point, she takes an amusingly unseemly interest in a TV nature documentary about a spider eating its mate). And then finally there’s Ana (Marija Skaricic), an alienated punkette from Sarajevo who winds up getting a job at the cafeteria (despite a dark secret that seems like a manipulative screenwriter’s device) and, in a peculiarly dour European sort of way, eventually teaches the other two how to live again yada yada yada.

This is actually a lot more interesting than it sounds, especially the stuff about the psychological aftermaths of the war in Bosnia (a generation-defining tragedy about which most Americans, sadly, know little and care less), and Skaricic is a riveting, occasionally heartbreaking screen presence. Unfortunately, Staka doesn’t seem particularly interested in making it easy to feel for any of the characters, and the film overall is a little too grim for its own good; in fact, if Zurich is as dark as Staka portrays it, it’s got to be one of the top ten most existentially depressing places on Earth.