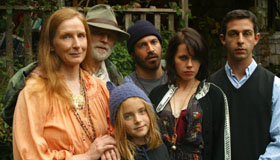 An uptight UCLA med student rendezvous with a drifting jazz singer in writer/directors Darren Grodsky and Danny Jacobs’ debut: a moderately balanced debate between establishment and freedom—freedom wins, but barely. Its strong and recognizable ensemble should boost interest in a modest dramedy that deserves to stand apart from a solipsistic genre.

Representing order is Peter’s (Jeremy Strong) father, Professor Hadley (Peter Bogdanovich), who’s such a stickler for the rules, he threatens to fail his son and dash his top-tier residency. On the side of liberation—or chaos—is Bogart (Fairuza Balk, still in full eyeliner and with a mad grin), a wanderer with such a loose code of behavior she sleeps with Peter even after he mistakes her for a hooker and then drives him up to her adopted family’s shack in Northern California. Her parents Jack (Brad Dourif) and Rosie (Frances Conroy) smoke a lot of weed. So does everyone else from her sorta-boyfriend, sorta-brother Max (Chris Messina) to her sorta-niece Charity (Madison Davenport), a moppet who rolls a fat blunt and reads The Closing of the American Mind as a bedtime story.

Grodsky and Jacobs make it clear that Bogart’s posse aren’t hippies, but woodspeople; their rebellion runs as deep as the roots of the surrounding redwoods. (In which they’ve planted dozens of marijuana plants.) After Bogart ditches him at her homestead, Peter’s stuck—everyone’s too high to give him a ride, and eventually, inevitably, he joins in. His smoked-out transformation from sweater vests to ragged tees is quick, but the script deftly avoids outrageous slapstick: he tokes, leans back and his face is slowly obliterated by the sun. He learns to shake free—nothing new there—but the film looks askance on both ways of life. The indie folk on the soundtrack teeter the film perilously close to another emo Gen-X flick about discovering who you really are, man, yet its quiet assurance hoists it to the top of genre.

The wide age range of the cast helps cut down on the late-twenties navel-gazing as each character is simply and evocatively drawn. The luminous Conroy has a several-minutes-long monologue about the death of a past lover during which the camera holds still on her face, soaking her in. A lecture on the proper number of pot plants to grow encapsulates the wild-eyed Jack’s philosophy on greed, balance and protection, and while the rigid Professor Hadley is the least humanized, the final credits run next to a single take of him eating a sandwich and reading the paper in tragic obliviousness to the world he’s never looked up at to see. The answer to Peter’s right amount of disorder is naive, but this first feature shows promise.