close
While it's no animated classic, Igor should still entertain 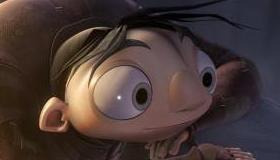 Considering all the territory that has been covered by animated features in the last couple of decades, it’s nice to report that in Igor, relative newcomer director Tony Leondis and writer Chris McKenna (TV’s American Dad ) have stumbled on to a completely original concept, a Frankenstein ’toon that’s clever enough to please both kids and their parents (for a change). Box office returns may not have WALL-E watching his back, but with a decided lack of early fall family fare and some good word of mouth, Igor just might have the formula for a September surprise for MGM.

In a world of manmade monsters and creepy science labs, Igor is a frustrated assistant who wants to move up in the profession and become an evil scientist in his own right. When his not-so-nice boss dies just before the annual Evil Science Fair, Igor sees an opening. With self-created sidekicks Brain (in a jar) and Scamper (a nutty rabbit brought back from the brink of roadkill), Igor goes to work on his creation which unfortunately turns out to be less Frankenstein and more Annie in the form of a humungous wannabe actress named Eva who would rather sing showtunes (“Tomorrow”—yikes!) than kill any living thing.

True to its standard movie roots, the film’s band of crazy misfits uncover a mad plot that threatens the whole world and now must use all their might and ingenuity to save the planet.

What sets Igor apart is a genuinely clever script from McKenna, who cut his teeth over five seasons as a writer and producer on the hip Fox ’toon American Dad. With this concept, he delivers a sprightly group of characters who spout some wryly funny lines, with many sailing right over the heads of the youngest tykes, but certain to be appreciated by mom and dad. This is the rare kid flick that’s actually a winner for every member of the family.

Production values are first rate considering the budget is much less than the kind Pixar or DreamWorks Animation routinely work with. Every dollar is on screen, though, and the voice cast that has been assembled is led by John Cusack, warm and funny in the title role, ably assisted by the hilarious rants of Steve Buscemi (Scamper) and Sean Hayes (Brain) as his partners in grime. Other noteworthy actors contributing to the fun are John Cleese, Jennifer Coolidge, Eddie Izzard and Molly Shannon—who is hilarious as the Broadway-bound Eva. Even former late-night rivals Jay Leno and Arsenio Hall are around for short bits.

Although MGM is hardly known as a hit factory these days, Igor is just smart and funny enough to possibly give the ailing lion an unexpected winner until the next big-kids treat comes along.