close
Most of this Corner would play better on TV 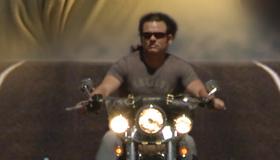 It’s hard to determine how many people live in the real-life Jake’s Corner, Ariz., as the high-desert hamlet is unincorporated. But it seems safe to assume, however, that the audience for this tale of a football-player-turned-tavern-owner who decides not to tell a kid that his parents are dead in order to spare him the pain of the revelation will be about as sparse.

Speaking of real-life, only 73 men have ever won the Heisman Trophy. Willing to wager most of them didn’t use college football’s most iconic individual award as a doorstop to prop open the entrance to the owner’s office at a bar in a tiny town in the middle of nowhere. But the fictional Johnny Dunn (Richard Tyson, most memorable as the villain in Kindergarten Cop ), the antihero of Jake’s Corner, leads a life diametrically opposed to those of most Heisman Trophy winners—walking away from a multimillion-dollar NFL deal to while away his days at a tavern in the aftermath of a family tragedy.

It’s another family tragedy, a car crash that takes the lives of his sister and brother-in-law, which forces Johnny to leave Jake’s Corner long enough to take custody of his orphaned nephew Spence (non-pro newcomer Colton Rodgers). Due to a concussion suffered in the accident, the kid’s memory of the accident is foggy at best. That Spence swallows his uncle’s singularly lame line that his parents are actually alive but in isolated ICUs that don’t allow even the closest of relatives to visit, however, would seem to indicate that the boy was a bit foggy before the accident, as well. Because Johnny owns not only the Jake’s Corner Bar, but also the entire town named for it, he is able to order all of the (of course) colorful characters who reside there—most of whom are his employees—to lie to Spence, as well.

Emotionally motivated by the first, deliberately-withheld-until-it’s-already-obvious family tragedy and logically motivated by  well, a screenwriter’s necessity, Johnny’s deception is misguided on a number of levels. And the performances of Tyson and his supporting players, including omnipresent tough guy Danny Trejo (160 credits and counting on IMDb), aren’t strong enough to sell the silly premise.

On a technical level, Jake’s Corner looks less like a theatrical release than an extended pilot for a Northern Exposure -style small-town sitcom. Which might be a better fit for these characters and this setting, if it weren’t for the whole lying-to-a-kid-about-the-fact-that-his-parents-are-dead plot.