close
Despite an intriguing premise, Lakeview is a mess 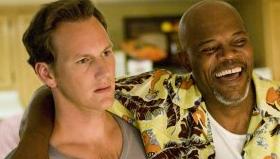 Always attracted to hot-button material, director Neil LaBute has returned to what he does best in Lakeview Terrace after veering off with that ill-advised remake of The Wicker Man a few years ago. Responsible for conversation starters like In the Company of Men and Your Friends and Neighbors, LaBute’s latest—a thriller about an interracial married couple stalked by a racist cop—has the bite of current cultural prejudice but also the watered-down feel of a studio film (especially in the last third). Curious ticket buyers will be there opening weekend, but anything after that may stall due to mixed word of mouth.

Abel Turner (Samuel L. Jackson) is a widowed 20-year veteran of the L.A.P.D. but still working the streets as a patrolman with a young sidekick. As Lakeview Terrace opens, it’s clear he is our guide through the story, and we see him as a stern father and uptight civilian. Chris and Lisa (Patrick Wilson and Kerry Washington), on the other hand, are the new neighbors at Lakeview Circle, the gated community where Abel lives and dominates with his overbearing presence. The young couple are treated as side characters when we first meet them, but turn out to be much more when they catch Abel’s prejudiced eye. The sometimes foolish back and forth between both sides quickly escalates from innocuous to life threatening.

It’s here where Lakeview Terrace begins to fall apart. The setup is intriguing, but the execution is juvenile and at times stupid. For Abel, it’s clear his record with the police department is in question, which explains his low-level status after decades of duty. We see him assault and blackmail criminals like your average movie rogue cop and tactfully use street knowledge to his advantage. Bringing his dark side home with him is obviously a bad move, but to see Abel start the film in human form and eventually turn into a cliched villain by the end is confusing and contradictory.

Chris and Lisa have a bigger set of problems dealing with race and machismo. While one (Lisa) simply thinks she can talk Abel down just because they’re both black, the other (Chris) is threatened by society’s skewered view of interracial couples and has his guard up as a result. That extra level of insecurity is what leads Chris to do the exact opposite of what a logical person should do in a tense situation.

Lakeview Terrace is on par with Pacific Heights and Unlawful Entry, two other home-invasion movies where a couple takes the law into their own hands, and LaBute seems confident of that fact. It’s an enjoyable mess but a mess regardless.