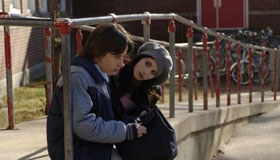 A well-known cast featuring Alec Baldwin, Cynthia Nixon and Timothy Hutton and the familiar backdrop of suburban Long Island are just some of the audience-pleasing pieces that make up first-time filmmaker Derick Martini’s lively, impossible-to-resist, family-in-crisis drama Lymelife. With its late-’70s setting brought to colorful life and a welcome balance of heartache and humor, Lymelife looks to be an independent drama with strong box office potential. An added bonus that may help attract audiences younger than the typical arthouse patrons lies with teen co-stars Rory Culkin and Emma Roberts. While they may not claim the marquee power of Baldwin or Nixon, Culkin and Roberts bring Lymelife its best performances and help boost the film above the ranks of the ordinary, dysfunctional family tale.

Scott Bartlett (Culkin) is a shy 15-year-old watching his parents (Baldwin and Jill Hennessy) break apart despite their rising financial fortunes and plans for a modern new house on Long Island. Scott’s only spark in an otherwise glum life is Adrianna (Roberts), his pretty neighbor and longtime friend. The catch is that Scott craves Adrianna as more than a friend.

Lymelife ’s period, suburban setting and family dramas draw comparisons to The Ice Storm and Ordinary People ; two of the better films in the genre. While Martini does not match the filmmaking talents behind those classic films by Ang Lee and Robert Redford, he shows himself skilled at generating good performances from his recognizable cast. Audiences who appreciate comic release with their melodrama will find Lymelife extremely satisfying. While its broken-family tale offers few surprises, apart from a subplot involving Lyme disease and a surprising climax that ends the film on a perfect, somewhat cynical note, Lymelife becomes an enjoyable, coming-of-age drama thanks to its appealing young leads.

Martini, who co-wrote and acted in the independent comedy Goat and Fire and Smiling Fish (1999), proves to be a filmmaker with potential. His technical skills are solid in Lymelife. If anything, it’s his storytelling that needs some honing and perhaps the courage to upend popular genres. Cameraman Frank Godwin captures the beauty in the neighborhood taverns and church hall dances that make up Scott’s blue-collar surroundings. Editing work from Derick and Steven Martini as well as Mark Yoshikawa keep the storytelling swift. Just when the film becomes overly predictable, Scott faces a new drama.

Rory Culkin is likable and utterly believable as Scott, an ordinary kid caught up in extraordinary drama due to the breakdown between his parents. Kieran Culkin, Rory’s real-life brother, makes the most of his supporting role as Scott’s older brother, a soldier visiting home from the army.

Emma Roberts may be the most pivotal character in the movie, both caring and flirty as the object of Scott’s affections. When the story shifts and Roberts need to be supportive, she is there to keep the film from losing its hopefulness for a better life.