close
Lee provides an ambitious, yet slightly unfocused, take on WWII with Miracle 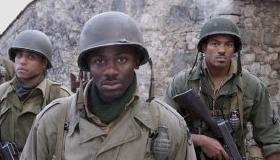 A different face of World War II is shown in Miracle at St. Anna, a very entertaining yet uneven piece from director Spike Lee. Following four black soldiers as they fight their way through enemy territory to return to neutral ground, the film is a strange hybrid of several different movies rolled into one. Clocking in at over two and a half hours, the journey is worth the time investment, but may not be embraced by the masses due to length and structure.

Lee has always been an innovator with films like Do the Right Thing and Malcolm X, but it was not until Inside Man, his most commercial movie, that he was able to break into the mainstream. While it's great to have more people discover his work, it's even better to know that commercial success hasn't changed his filmmaking style. Lee has always relished coloring outside the lines, never shying away from taboo material or taking the easy way out. Sometimes it works to great effect ( 25th Hour ) and sometimes it doesn't ( Girl 6 ), but his artistic failures are infinitely more enjoyable than the "successes" of more cookie-cutter directors.

The film opens with a murder mystery as a black postal worker shoots another man for reasons are not revealed upfront. The shooting leads to a police investigation that uncovers a lost and extremely valuable Italian artifact at the gunman's home. From here the story shifts back to 1944 Tuscany where the gunman is one of a group of four Buffalo Soldiers lost from their unit and trying to find their way to safe territory. Sgt. Aubrey Stamps (Derek Luke) is the leader, Sgt. Bishop Cummings (Michael Ealy) is the opportunist, Cpl. Hector Negron (Laz Alonso) is the level-headed fighter and Pvt. Sam Train (Omar Benson Miller) is the teddy bear overflowing with compassion and heart.

It's Pvt. Train's semi-emotional scenes with a young rescued Italian boy that sometimes threaten to derail Miracle at St. Anna. There is gruesome violence in this picture, as the war scenes are worthy of their hard-R rating, but the decision to balance out the chaos with heart results in some of the film's most cringe-worthy dialogue by screenwriter James McBride.

Miracle at St. Anna is more akin to another interesting Spike Lee misfire, She Hate Me not in subject matter, but in tone and story structure. Both films hover around two and a half hours and are bloated with so much extra material that each literally feels like two very different movies in one. This isn't necessarily a bad thing, but Miracle at St. Anna in particular feels like a mystery and war epic rolled into one. It's always engaging, but the constant tonal shifts sometimes disjoint what should have been a seamless narrative.