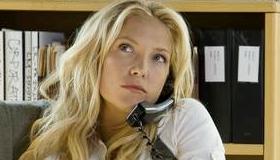 Ladies hate Dane Cook—and he’s smirking all the way to the bank. His gift is scared-straight dinners that remind freshly-single girls that the dating market isn’t any cheerier than Wall Street. (And their exes cut him more cash than stockholders have seen this year.) Lowering expectations is his lucrative part-time gig—naturally, his steady one is customer service—even though his roommate and best friend Dustin (Jason Biggs) calls it “emotional terrorism.” Cook prefers “tanking,” a term he likes so much Tank is his character’s go-to name.

Howard Deutch’s pragmatic shock-romantic comedy divides people into jerks and pushovers: those who screw and smile and those who sigh alone. It’s an anti-romance where women are content to nod along as Tank explains that they prefer being treated like crap. “You really are an asshole,” gripes a model-perfect 10. “Then walk away,” he counters. Cut to them making out in an alley. Dustin is the optimist who just professed love to his co-worker and quasi girlfriend of five weeks, Alexis (Kate Hudson). And so she dumps him. C’mon, he’s such a pussywillow, he orders them both steak when he’s a vegan. (Though screenwriter Jordan Cahan must have forgotten that detail after the breakup leaves him stuffing his face with Doritos.) Alexis is level-headed; therefore, according to roommate Ami (Lizzy Caplan) and the rules of Deutch’s romance, she must go insane and bonk everything with a schlong, human and plastic. Which is how she resolves to tolerate Tank’s jerkface routine after Dustin sics him on his lady love.

Why do women prefer pricks? Deutch and Cahan avoid psychoanalysis, but we empathize with both Alexis and Dustin as his increasingly elaborate gift displays of donuts build a wall between them thicker than the inches of new padding on her hips. By contrast, her connection to Tank is purely physical. Still, after arguing—with conviction—that the best way to survive on the meat market is to put yourself on sale, Cook warms to Hudson’s gorgeous tom-boy charms, much to the surprise of everyone he’s ever met, including dad Alec Baldwin in a one-note riot of a role as a horndog Women’s Studies professor. (In his first and best scene, he punctuates a bananas story about last night’s coed with, “Now that’s a Tuesday night!”)

Cook and Hudson have a passably brash chemistry. Like the great screwball comedies, their turn-on is savaging each other with insults, though Gable and Lombard didn’t share their focus on testicles. It’s not a huge compliment to call this Cook’s best film—though it is—but Cahan’s curious and increasingly sincere slant on modern romance outshines its efforts to please his MySpace fan base with gross-out gags. (Some of which are damned funny, like a wedding scene where he drops his pants before the mother of the bride and announces, “C’mon, it’s not going to suck itself.”) Cook’s crisis is that after years of being the lowest common denominator, he’s less than Hudson deserves. Oddly, while today’s female writers pen insults like 21 Dresses and The Accidental Husband, male filmmakers have never been more sincere and affecting. Films like My Best Friend’s Girl and Adam Brooks’ Definitely, Maybe are about choices, not fate. They believe in work, not soul mates, the best stripping their male leads of the Ken-doll perfection of chick flicks that seem to say an ovulating womb will settle for any hunk of meat. And when Hudson dismisses Cook by telling him he’s not the one, his patient reply—“Not yet, but I’ll get there”—is more romantic than a shipping truck of roses.