close
Rodanthe isn't entirely worth making a trip to 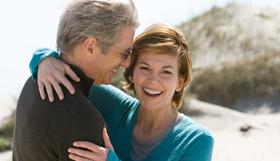 Producers hope the same ilk who, four years ago, gushed over the successful romantic chick-flick The Notebook will get swept away again. But Hollywood’s hedged bets that lightning will strike twice by adapting another tome from Notebook novelist Nicolas Sparks falls short with its Syd Field plot points and pop-single dénouements. And despite going down and dirty in the South, this is no small-scale shoot. Thespian-turned-director George C. Wolfe brought in a helicopter or two and paid top studio coin for sound designers to recreate Hurricane Ike-like conditions. As it were, Nights in Rodanthe takes a man and a woman, each in midlife crisis, and intersects them while holed-up in a rickety old seaside B&B. As each ponders their life’s discontent, they embark on a romance that’s as transient as the sand beneath their feet. While Wall Street feels more like Woe Street, auds are gonna be more than keen to sink their teeth into this tearjerking cupcake with extra-thick frosting puttied all around.

The sell must have been savory: “Dick and Diane—come get away from it all at the beach down South while the cameras roll; and oh yes, here’s a screenplay based off of this novel by the guy who wrote The Notebook. Say yes, pretty please!” Just your run-of-the-mill get-together along North Carolina’s Outer Banks—but Hollywood style. Thing is Dick is Richard Gere, and Diane is Diane Lane. Marquis names. However delectable they might be at times onscreen, Ingrid Bergman and Humphrey Bogart, they’re not. While some will go to see the film because they read every Sparks book, others will want to jump back into the seat to see Lane and Gere reprise their wicked chemistry from the days they played opposite each other in Unfaithful. Unfortunately, the material here is bit boilerplate. In Nights in Rodanthe, the thrills and chills of the aforementioned film have gone. What’s left is a greasy display of two stars trying too hard to still squeeze pulp out of freeze-dried fruit.

With marriage on hiatus, Adrienne Willis (Diane Lane) takes a sojourn from her teenage daughter and asthmatic toddler son to ponder her next move. Playing shopkeep at a coastal mansion for a week is just the ticket. The lone guest at the bed and breakfast is Dr. Paul Flanner (Richard Gere), a divorcee who is trying to right a very critical wrong. While performing surgery to remove a cyst on a woman’s face, the patient died under his watch. Coming down South is a way to make amends with the widower and ultimately put the stop on a pending malpractice lawsuit. Dr. Flanner’s strained relationship with his son is also at play here, because after amends are made in North Carolina, the good doc is heading to South America to bond and role-up his sleeves to help treat underprivileged children. Meantime, Adrienne’s character shows some of her woodwork from when she was an artist and anecdotally gabs about mythical ponies and fabled sunsets. As Adrienne takes emotional inventory while dressing a Cornish hen for supper, Dr. Flanner, ever so masculine, constantly gives the business over the cell phone to some unfortunate someone on the other end.

The two soon discard their formal roles. She cooks and tidies his room while snooping through his papers. He sips vino alone at first, and then rebelliously refuses to put an address in the registry as is custom. The air is cleared when Dr. Flanner takes his dinner plate to sit with Adrienne in the kitchen for company, and they play Dinah Washington records. Before long, the two are gutting the pantry of expired Hurricane canned provisions for a rush. While Dr. Flanner’s secrets begin to spew, so too do Adrienne’s. She’s facing a predicament of deciding whether to return to her domestic function as wife to a deserting hubby named Jack (Christopher Meloni). Jack wants his wife back, but Adrienne’s on the fence.

It only takes a few days for the doctor to seal the wounds of his counterpart and close the deal in the sack. Her tenderness teaches him to have a heart, and he reciprocates by reinforcing that, yes, she’s still an artist and truly alive no matter how inanimate she feels. After the booze has been shot, and the bad boy of a hurricane hits—as well as the mea culpas made to the widower— this romance clearly is not going to going to fade away into the horizon. There’s a future here.

The menu options escalate from night to night and so too does the status of the relationship. By day three they’re well onto grilled salmon and locking lips. The J. Crew denim shirts and sweaters stay the same throughout.

The actors have little to work with here. Each is given a script that has the gift of blah. The doctor is fit with asking the tough questions like, “What keeps you safe?” Subsequently, Gere can’t figure out if he’s the big suit from Pretty Woman still driving the sports car and wooing the hooker and staring downward with a morose squint when faced with rejection. And Adrienne is played almost too coy. With lines like, “Stop it,” when she’s really angry, one wonders if improvisation could have served as a fallback to test how far each actor could have gone, free from the screenplay’s confines. But at least in Adrienne, you get a sense that there is strength beneath the timidity. Lane is damn good when you get everybody else out of the picture. She could carry this and any film by herself.

The pluck of this film fizzles in the whitewash. The core is sweet but shallow. In terms of sophistication, you barely go beyond knee-deep level. For a romance that should strike your internal strings and ruffle comfort zones, the work barely registers. It’s well and good to keep with this oral history approach and fall back into time with a couple of characters who have a chance to have it all for an hour and change—stay young and better their parental roles in the process. But give us something that has stronger jaws than this. Too tepid and too predictable of a picture to simply sail away into the sunset. Maybe next time.