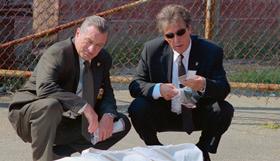 With parallel careers and egos stretching back to their—and modern American cinema’s—youths, it’s about time Diane Keaton and Jodie Foster headlined a movie together. Oh, and Al Pacino and Robert De Niro, if you’re into that. It’s something the misters should have done decades ago when they were hungry. Now, in the public eye at least, they’ve devoured their peers. Who can be competitive with a full stomach? (Even if much of it is hot air.) There’s no meat in Jon Avnet’s generic cop thriller, not even the pleasure of Pacino’s ham. Still, I reckon cowed cineastes will flock to the movieplex and hail it as a triumph, only to pop in an old DVD at home and sigh.

Cast as—get this—two tough, gun-toting cranks, Pacino and De Niro are NYPD cops with 120 years of service between them, they boast facetiously. If you do the math, the figure isn’t wildly off. But though Pacino and De Niro have over 130 years of life between them, the film insists they’re still badasses. Hell, Avnet opens with them at a shooting range firing machine guns. Five minutes in, they’ve also proven themselves as chess masters and pantie droppers in an editing montage with the fast, frantic cuts of a younger man’s movie. The brash braggadocio of the film gives a sense of insecure unease—there are teens who drive too fast because they think they’re immortal, but also others who race because they’re resigned that they aren’t.

The last four years of their service, someone’s been offing perps who’ve slipped through the justice department’s cracks: rapists, child murderers, pimps and mobster brutes all shot dead with a badly written retributive poem on their corpses. As the film opens, De Niro’s confessing to the crimes, but while it’s not sure how much Pacino knows, it’s clear they both feel in the moral clear. Travis Bickle has a posse. Of course, the dark current of Taxi Driver forced audiences to question when De Niro crossed into evil. Here, the rightness or wrongness of ridding New York of creeps is moot. “Who cares?” Avnet and screenwriter Russell Gerwirtz seem to say. “Don’t you really just want to hear them banter about whether Underdog is a speed freak?”

Hinting at a swamp of emotions under a tough front is something even Jessica Alba’s worked on. But oddly, instead of the competition spurring them on like greyhounds nearing retirement, Pacino and De Niro seem locked in combat of the casual. Neither seems to give a hoot about the script—no blame there—but they breeze through the material as if they’re battling to see who’s confident enough to wing it. One or both of them are serial killers, but they’re too casual for insanity. If they’re off the deep end, it’s in a damned shallow pool. Donnie Wahlberg and John Leguizamo—playing two junior cops tracking down the Poet Boy, as he’s called—have more to prove. They earn their paychecks (albeit in cheap roles). Similarly priced is Curtis “50 Cent” Jackson as a kingpin coke dealer who runs a mega-club that, due to a lazy script oversight, is conveniently empty on a Friday night. Such dullardisms litter the script, which forces its characters to make such boneheaded decisions you’d be screaming at the screen (if you cared). But word to Pacino and De Niro: When your long-heralded vanity project has a scene where 50 Cent calls you dumb—and the audience agrees—get out of the Jacuzzi and fire your agent.