close
All hail the return of Guy Ritchie 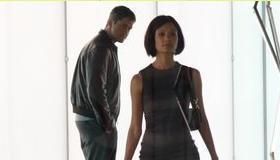 Guy Ritchie is back from the dead. A filmmaking career that began on such a high note with the ebullient Brit-crime comedies Lock, Stock and Two Smoking Barrels and Snatch crashed and burned on the heels of two cataclysmic disasters: the ridiculous Swept Away and the impenetrable Revolver. But now Ritchie stages his spectacular comeback with RocknRolla, an exuberant, witty story of high crimes, lowlifes and real estate that does not just breathe new life into a moribund career, but ups the London-based writer/director’s game to a whole new level. Gerard Butler, Tom Wilkinson and Thandie Newton head up a sleek ensemble in this black comic caper that offers broad appeal to action, crime and dark-comedy buffs and should score strongly at the box office, even if the movie’s colloquial humor and its characters’ thick regional accents may somewhat dampen returns.

Real estate is the hot new venture in a rapidly evolving London where there is so much new construction going on that cranes dominate the view and the skyline seems to change on a weekly basis. Small-time grifters One Two (Butler) and Mumbles (Idris Elba), two members of a criminal enterprise known as the Wild Bunch, want in on the action. So does Russian billionaire Uri Obomavich (Karel Roden). Neither can get into the highly competitive and corrupt business without the services of old-time mobster Lenny Cole (Wilkinson), a man who wields such enormous power that one word from him can make or break a venture. Also, figuring into the action are Uri’s brilliant, gorgeous and underhanded accountant Stella (Thandie Newton) and Lenny’s punk-rock star, rumored-to-be-dead stepson Johnny Quid (Toby Kebbell), whose small act of petty rebellion against the old man sends the movie’s double- and triple-crosses into hyper-drive.

Ritchie has constructed a convoluted plot involving corruption along all social strata and complicated schemes to commandeer pieces of London’s real estate market. But story is not really the filmmaker’s strength; it’s simply a decorative outline to complement the vibrant life seething inside the frame. As complex moves and countermoves unfold in lives played as kind of an ultra-violent chess game, what stands out are the elements that made Ritchie’s first movies such a delight to behold: vivid characters, a kinetic visual style and pungent, profane and hilarious dialogue.

The movie is a pleasure, from the animated title sequence that kicks it off to its violent climax, but individual scenes rather than the whole stand out: a sequence that illustrates Lenny’s power as he promises to grease a deal for a supplicant only to kill it so that he can take it over himself; Russian mobsters trailing after One Two, whose frenzied running barely keeps him clear of his pursuers; One Two and Stella in a spastic dance, a ludicrous expression of their growing attraction; seemingly half-dead junkie Johnny Quid swaying in the squalor of his crash-pad flat, barely able to remain upright.

Some scenes are downright silly, such as a running gag involving One Two’s revelation that an associate is gay. Sometimes, RocknRolla is even chilling: the climax, for example, where blood and revelations spill in a scene that brings many of the disparate characters together, including Lenny, his right-hand man Archy (Mark Strong), One Two and the rest of the Wild Bunch, Johnny Quid and Quid’s clueless American managers Roman (Jeremy Piven) and Mickey (Chris “Ludacris” Bridges).

RocknRolla is simply a blast, a gleeful romp from start to finish, and by far, Ritchie’s strongest, most assured movie to date. This is the work of a mature filmmaker. Perfectly cast, precisely constructed and confident in its humor, it surpasses the expectations that Lock, Stock and Two Smoking Barrels and Snatch set up so long ago. Ritchie seemed so lost for so long, but he has apparently regained his sense of direction just in time to make a boisterous and welcome return.