close
Save plays too much like a movie of the week 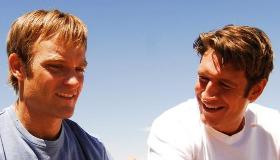 Save Me treads territory that might have been fodder for a TV movie of the week—if they still made movies of the week. But they don’t, so this film about a young rebellious gay man, Mark (sitcom actor Chad Allen), and his time at a Christian retreat that attempts fix “broken sexual behavior” is in theatrical release, which simply isn’t where it’s likely to be encountered by parties interested in the rather obscure subject. For this reason alone box office returns will be slight, as for parties interested in the subject, they may be slight as well.

Which is not a knock on the filmmaking. Save Me is about as well made a movie as any, and certainly it culls this subject better than most. It attempts to walk a very narrow line, sincerely hoping not to offend anyone as it nevertheless, however obliquely, still says that homosexual behavior is a sin and gay guys ought to cut it out. It is in fact “behavior” that’s at issue in Save Me. When Mark’s brother checks him into Genesis House, which Gayle (sitcom actress Judith Light) and her husband Ted (Stephen Lang) run like a post-modern Christian boot camp, he is at first sincerely interested in adjusting his tendencies. Then he meets a really cute guy, Scott (Robert Grant), a “fifth-phaser” in the de-homo-ing program, who is intended to be his mentor. Tendencies are tendencies for a reason, so things between the two lovely boys heat up—which is not to say that anything particularly salacious happens. Save Me really is a TV movie with a definitively Christian slant. And, though director Robert Cary and primary screenwriter Robert Desiderio might have demonized (or sanctified) any one of its characters, they do neither. Light’s lightly caustic performance is a cloak for a character that is deeply empathic to the plight of these men, even if for fairly trite personal reasons revealed in classic M.O.W. fashion. One should also note that Allen gives a poignant and sincere performance steeped in verisimilitude.

Collectively, however, what we have here is a religious movie that has at its center a Christian point of view about homosexuality and homosexual behavior, which it would very much like to reconcile, but can’t, because these issues are not reconcilable without either cheating the faith or condemning the gay. Neither of which Save Me is willing to do. Which may be laudable, but only works in TV movies.