close
A stranger in is own home... 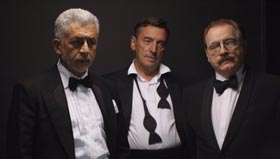 What’s it like to be a Muslim in Britain following the London transport terrorist attacks of July 7, 2005? How about if you’re a Muslim cop—the highest-ranking in the land? Those are the two major questions posed by this fictional work, which takes its title from a real standing police order issued after the attacks and, seemingly, its inspiration from both nighttime soaps like EastEnders and the PBS Mystery! series. Shoot on Sight raises many serious political and social questions in an earnest if clumsy and melodramatic manner. Opening in 40 North American theaters, presumably in markets with high Muslim populations, it’s better suited to a one-night stand on a mid-level cable outlet prior to its DVD release.

Following Great Britain’s smaller version of 9/11 when the London Underground and selected bus lines were bombed, the Muslim population came under unprecedented suspicion. Hence the film’s tagline: “Is it a crime to be Muslim?” Assuming prejudice did mushroom, there’s still something odd about the filmmakers claiming those events “inspired” the movie. Surely, they simply mean there was a causal connection between the attacks, the climate they fostered and the notion of making a movie about a fictional police commander named Tariq Ali (Naseeruddin Shah) assigned to investigate the killing of an innocent Muslim in the wake of the bombings.

During a breathless opening sequence, members of a special police unit—looking more suspicious than their quarry—gun down a young man as he’s standing on a platform in the Charing Cross tube station. The brass at New Scotland Yard are faced with a public relations disaster, but they also have a secret weapon. Our first glimpse of Tariq is a close-up of his hands fingering prayer beads before he nimbly deflects the press during a news conference. His superior officer (Brian Cox) then asks him to conduct his own investigation into the shooting, one that will exonerate the department or at least minimize the damage. His reward will be promotion to deputy assistant commissioner, and he’d be the first Asian to reach that rank in the history of the British constabulary. Whatever his qualifications, it doesn’t hurt that he has an English wife played by Greta Scacchi and a stunningly beautiful daughter played by Sadie Frost.

Tariq’s predicament is obvious. Born in Pakistan, he’s distrusted by his British colleagues and by his fellow Muslims. In particular, he’s grown apart from his boyhood friend Junaid (Om Puri), who has become a radical London-area imam preaching hate against the West, naming his own axis of evil in America, Britain and Israel, and leading a terrorist cell. Shah nicely underplays Tariq’s professional ambition, and he cuts a dapper figure. Tariq must pull down a nice salary, since the house he shares with his wife and two kids is quite posh and his suits look to be from Savile Row. Then again, his seniority (or his wife’s assets) could explain his sartorial budget and digs, and many a British movie and TV detective has had an unconventional and far more eccentric appearance. Tariq is equally comfortable in his uniform or wearing a skullcap in a mosque, in the halls of power or saying his daily prayers in his office. For his part, Cox looks terribly ill at ease playing a stock establishment figure such as Tariq’s unctuous boss.

Family tribulations serve as a diversion, as when Tariq’s daughter gets busted at a rave party, and are key to the story, as when then his nephew arrives from Pakistan to study engineering. You know something is up with this too-perky kid, and it doesn’t help that the action is telegraphed and that much of the supporting and walk-on acting is feeble. Shoot on Sight occupies the rational middle ground of moderation while celebrating Britain’s multi-cultural reality; it doesn’t strive to be overtly political as much as heighten the viewer’s awareness of how difficult it has been to be a Muslim in the west during the last eight years. By conveying the message that peace-loving, law-abiding Muslims don’t want to be lumped in with Islamic terrorists and violent radicals, Shoot on Sight hits the bull’s-eye on a very large target.