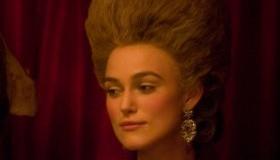 With its seductive period settings, glorious costumes and the stellar pairing of Keira Knightley and Ralph Fiennes, it is difficult to see how The Duchess could fail to stir significant interest—plus the added attraction in the publicity stakes of a resonance with the life of Diana, the self-styled “People’s Princess.”

When Britain’s Princess Diana made her comment that “there were three of us in this marriage,” it is unlikely she was making any parallel with her own family circumstances. But such a link does exist, because 200 years ago, when the Duke of Devonshire was married to Lady Georgiana Spencer, he started a ménage à trois with one of the Duchess’s closest friends, Lady Bess Foster.

Director Saul Dibb does not overmilk the links, but clearly they are there and they are made clear on the posters and the trailers. Georgiana was a commoner chosen from the ranks by the Duke (Ralph Fiennes) to become his wife. The marriage rapidly turns sour and he has several mistresses on the side. The Duchess throws herself into society, incurs gambling debts and causes several scandals, which are taken up and reported by the newspapers of the day. Just below the surface, hints of political revolution are bubbling.

Knightley looks ravishing while underneath the costumes, the wigs and the makeup—this is a controlled, measured and mature performance that finds much of its spirit in her special relationship with Lady Bess Foster (Hayley Atwell), with whom she eventually shares her husband.

Fiennes equally gives a cleverly honed portrayal of the boorish duke who takes more of an interest in Bess than his wife and spends most of the rest of his time with maids or in the company of his dogs. His cruelty, scheming and malevolence give the film an edge that it would otherwise not possess, and Fiennes’s performance adds the necessary chill factor.

Charlotte Rampling plays Georgiana’s mother with an icy and manipulative exterior, recognizing that her daughter has sacrificed her own happiness for status and a coveted title. Most of the film revolves around her inability to produce a male heir and the slow disintegration of the marriage.

Dominic Cooper plays one of the many men in her coterie—a former childhood acquaintance—with a certain stoic resolve. He’s a rising Whig politician and a future Prime Minister, but the all-consuming nature of the affair sees caution thrown to the winds.

Dibb ensures that the plot is driven forward with a sense of urgency amid all the glitter, candles, carriages and gorgeous threads and manages to avoid becoming mired in period detail. The Duchess, even in limited release, should find ready takers from those who flocked to see Pride and Prejudice and The Other Boleyn Girl.