The Loss of a Teardrop Diamond 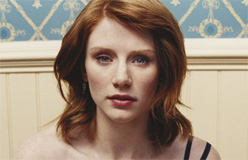 Fans of actress Bryce Dallas Howard from Hollywood blockbusters Spider-Man 3 and The Village may have a hard time recognizing her as a spoiled Memphis debutante beneath a Louise Brooks-inspired bob, cushy face and thick Southern drawl in The Loss of a Teardrop Diamond, a winning period romance based on a long-forgotten Tennessee Williams screenplay. The same sense of impressive disbelief can also be said of Chris Evans, Howard’s handsome co-star, whose role as the deb’s working-class boyfriend shares nothing in common with his work in the popular Fantastic Four movies. Yet, the marquee value of Howard and Evans, boosted by their on-screen sparks, the film’s feel-good romance and lush period setting in addition to the excitement of a new Williams story, qualifies Loss of a Teardrop Diamond as an arthouse release with enough commercial upsides to overcome any film outfit’s nervousness over the track record of period dramas. Loss of a Teardrop Diamond, a polished and pleasurable filmmaking debut from director Jodie Markell, may be too intimate a film for wide release, but with ample marketing has all the trappings of an arthouse success.

Fisher Willow (Howard) has returned to ’20s Memphis in time for the fall party season. In need of a steady date, she hires and dresses up one of her wealthy father’s farmhands, Jimmy (Evans), and passes him off as a well-off out-of-towner. Slowly, at least for Willow, the relationship transforms from professional to personal. But when she loses her great aunt’s (Ann-Margaret) teardrop diamond earrings and blames Jimmy, their relationship quickly turns sour.

Markell, an actress on the HBO series Big Love, shows courage tackling an unproduced Tennessee Williams script for her debut, but she proves herself a master at screen romance. With an ending as lovely as her attractive leads, Loss of a Teardrop Diamond is a Golden Age Hollywood-inspired nostalgia trip, but one worth taking. While the film is a true independent, its production values are top notch. Cinematographer Giles Nuttgens captures the beauty of the Memphis-area landscapes and its stately homes. Production designer Richard Hoover keeps the film’s ’20s era fantasy intact. Mark Orton provides a perfect musical backdrop. Editor Susan E. Morse deserves credit for the film’s easygoing rhythm.

Howard, who appears in almost every scene, makes a worthy heroine, at first glance unlikable, but slowly her spirit and verve for life wins us over. Period roles—and period roles with accents, in particular—can be a difficult task for actresses, but Howard remains natural, at ease in the role and completely believable from start to finish.

Evans, well known for his looks in throwaway comedies like The Nanny Diaries, shows depth and compassion as Jimmy, Willow’s hired date. In terms of performance, Evans stands shoulder to shoulder with Howard, which is quite an accomplishment. In terms of period love stories, Howard and Evans earn comparisons to Rachel McAdams and Ryan Gosling in The Notebook, and while their film is worlds apart in scope, the performances of Kate Winslet and Leonardo DiCaprio in Titanic.

It’s safe to say Markell will receive more directing offers thanks to her work here, and one expects a long career ahead.

With a film as classically well made as Loss of a Teardrop Diamond, there’s no denying its romantic spell.