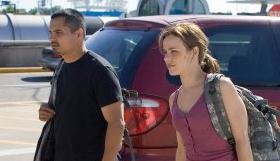 Veteran actor Tim Robbins is the paternal figure to up-and-comers Michael Pena and Rachel McAdams as three soldiers just back from Iraq who form an extended family when they take to the road in writer/director Neil Burger’s home-front drama The Lucky Ones. Audiences to date have rejected Iraq-themed productions, regardless of the setting. Despite an affecting story, evocative locations and a trio of touching performances, The Lucky Ones is not likely to buck that trend, though strong word of mouth among the modest mature audience it will attract may buoy its fortunes.

In a meet-cute scenario, Cheever (Robbins), Colee (McAdams) and TK (Pena) connect on the plane delivering them from the sick bay in Germany back to the States. Missouri reservist Cheever is headed back to his comfortable suburban life, his tour over, but Colee and TK, both recovering from minor wounds, are expected to report back in a month. But when they arrive in New York in the middle of a massive power outage, none of them are going anywhere with their connecting flights canceled until Cheever rents a car and agrees to ferry the others as far as his home in St. Louis.

Each has a lot riding on this trip, which eventually extends as far as Las Vegas after a change of heart leads Cheever to take the group at least as far as Colee’s eventual destination. Cheever just expects to blend right back in to his old existence, but the younger set is less sure of what awaits them in what is no longer quite home. TK is going to meet his girlfriend, but has massive anxiety over their impending reunion. Chatty, friendly, lonely Colee has a guitar belonging to a fallen comrade (and possible flame) that she is returning to his folks, hoping that they will invite her into their lives and become the family she lacks.

The drama’s one glaring weakness is that its contrivances are far too obvious, from the way the trio are forced on the road together (in the last rental car on the lot, yet) to the way the three—after going their separate ways in Las Vegas—happen to find each other again. Despite that, the unexpectedly light, sometimes humorous story is still enormously affecting. That is partially due to the tale’s forward momentum and its view of America from the highway, with its cheap diners and anonymous motels, a place where complete strangers offer a helping hand or a friendly invitation and where people are genuinely interested in these veterans’ experiences. The actors also contribute much to the saga, making living, breathing, empathetic characters out of what could easily veer into cardboard stereotypes in lesser performers’ hands.

But The Lucky One ’s greatest strength is that it is not just another Iraq war story. Unlike dramas such as Stop-Loss or In the Valley of Elah, which focused on the damage wrought on soldiers in combat, The Lucky Ones presents a portrait of three people who survived the carnage with their psyches and their souls intact. The film is all the more compelling for that, its stakes are higher and its antiwar message far more subtle. After getting to know these characters over the course of their cross-country journey, the idea that at least some of them will be returning to Iraq resonates with the force of tragedy.