The Man from London

on September 30, 2007 by Barbara Goslawski
Print 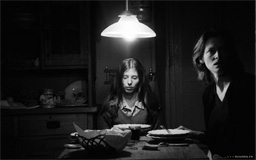 Béla Tarr is not at his best in The Man from London, which is unfortunate because novelist Georges Simeon’s chronicle of an ordinary man who tries to escape the drudgery of his daily life is such a perfect match for Tarr’s overriding concerns. Maloin (Miroslav Krobot), our hero, is a brute of a man, emoting nothing despite Tarr’s probing camera. Tilda Swinton plays his shrill, downtrodden wife Camelia, an unfortunate performance by a great talent.

Tarr’s signature long takes, peppered with great moments of silence, almost save this film, but not quite. Rather, his recent devolution as a director into unbearably grim (even for him) melodrama drags the narrative down. Even the music is grating. This mystery could have stood as one of the finest noir films in cinema, with the luscious black-and-white photography of masterfully composed visions of darkness, pierced by carefully balanced light. Unfortunately, what looks like a great film remains a mere shell of a great story.