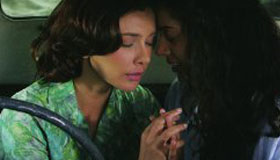 The World Unseen is South African writer/director Shamim Sarif’s adaptation of her own award-winning novel about a myriad of relationships at the beginning of the Apartheid laws in 1950s Cape Town. At the center of several stock storylines involving equally stock characters is a simmering lesbian relationship between a newly arrived young wife and mother and a freely spirited young shop owner. One supposes that a muted drama about the trials of forbidden love set against the backdrop of one of the darker moments in human history isn’t to be joyous, but a moment or two of levity wouldn’t have killed anybody. That, along with a demonstrable lack of actual lesbian sex may mute the box office potential of The World Unseen.

The storylines in The World Unseen that do not involve lesbian desire are of the more mundane sort, lots of angry white men, demurring black men and stoic white women. It’s all requisitely offensive. The one interesting diversion from the worn narrative path (the lesbians notwithstanding), is that the people of color at the center of tensions are for the most part not black, but in fact a member of an actual category called “colored,” which includes South Asians among others. Interestingly (and disgustingly), the colored peoples of South Africa suffered as many restrictions as did blacks, or for that matter whites, depending on your point-of-view.

Despite what one might think, drama in novels seldom translates well to film (Merchant/Ivory excepted), as it is nearly always underplayed or overplayed in comparison to the book. This may or may not be the case here, but we can safely say that The World Unseen is certainly overplayed in most instances, and not in the one category where it could have gotten away with it, which would have been during the lesbian sex scenes, of which there are actually, none.