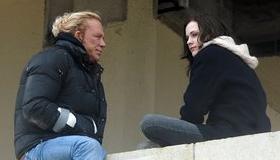 Director Darren Aronofsky’s new film The Wrestler is a quiet, intimate portrait of a troubled soul—someone at odds with himself and with life in general whose every ounce of pain and virtue is measured onscreen. Anyone feeling skeptical about seeing a “wrestling movie” should know that this poetic and energetic ride is about more than just wrestling and should embrace what is sure to be an Oscar contender when it’s released this December.

Randy “The Ram” Robinson is a washed-up wrestler whose glory days are far behind him. Once used to the spotlight and now reduced to working dead-end jobs and wrestling in local venues, the forgotten wrestler Randy is played by the forgotten actor Mickey Rourke. All the intensity and life experience Rourke has as a faded actor resonates in Randy the wrestler, making the obvious similarities between the two performers gel seamlessly.

Rourke plays Randy like a caged animal, aware of the past but stubbornly fighting to break free and write a new chapter in his life. The fire in Randy’s aging heart is finally tested when he suffers a cardiac arrest at the end of an incredibly gruesome wrestling match. Bones are broken, deep wounds are split and the aftermath is the bloody mess you never see on television. Doctors tell him to give up the ring or risk death, an order that any normal person wouldn’t bother questioning. But when Randy’s old nemesis challenges him to a final match, it ignites a chance to write that last chapter, after all.

We see throughout the film that Randy’s problems aren’t exclusively set in the wrestling ring. His distant relationship with his daughter Stephanie (Evan Rachel Wood) and constant pining for a friendly stripper (Marisa Tomei) are messy and chaotic, but also help make Randy more human and sympathetic. The ring is all he knows and dealing with something ordinary like family and basic human affection is completely foreign to him. Randy’s constant struggle to build a bridge between wrestling and his exterior life is the soul of the movie, something that would crash and burn without the right actor.

Most of The Wrestler ’s advance hype at the Toronto International Film Festival has centered around lead actor Mickey Rourke for good reason. This is his movie, and he carries it with all the confidence and charisma that has been missing from the last several years of his work. It is a comeback in every sense of the word, but at the same time is not a one-man show. Support is given primarily by maverick director Aronofsky, who has thankfully withdrawn from the overblown mechanics of his last film The Fountain and returned to the independent roots that made him famous with Pi and Requiem For A Dream. In the wrong hands, The Wrestler could be seen as just another formulaic underdog story, but it shines under the guidance of this passionate filmmaker.