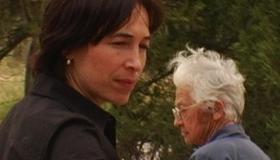 There is something inherently narcissistic in making a documentary about your family tree and thinking people will actually pay to see it. Such thoughts come to mind during random moments of Hava Volterra’s documentary about how her father’s death (and her own bout with cancer) motivated the Israeli-born Italian Jew to grab a camera and her elderly aunt and take a journey of familial discovery. She was able to trace her lineage from 14th-century Florence through World War II, when her family hid in a local cellar after the Nazis came to town. It’s all quite fascinating—if you’re Hava Volterra or her family, the latter destined to constitute the movie’s largest group of paying customers. Otherwise, the wisps of historical interest generated by Italy’s history of anti-Semitism should not have been enough to justify theatrical distribution. Cable and specialty showings are more in line with the project’s ambition and potential audience.

Volterra begins her story in Tuscany in the late 1300s, when the Pope only allowed Jews to have three types of jobs: moneylender, merchant or doctor. She focuses on one particular ancestor who set up shop as a moneylender, establishing a foothold in an otherwise Christian community. That man’s descendant was an associate of Florentine ruler Lorenzo de Medici, and from there we’re off, as Volterra’s relatives become a Semitic version of Forrest Gump, doing flybys over key historical eras. Volterra will learn that a centuries-old ancestor on her mother’s side was a famous and controversial Kabbalah scholar, while another wrote an important 15th-century travel guide to the Middle East. Moving towards the present day, we learn of other Volterra descendants, including Luigi Luzzatti, who was Italy’s first Jewish prime minister and Fiorello La Guardia, the former New York major.

The film gets more interesting during the pre-war years, when the family stood up ably to the encroaching Nazi presence. Hava’s aunt recalls 1938, when Mussolini threw in his lot with Hitler by stipulating that Jews could no longer attend public schools, work in government jobs, own real estate, practice medicine or own a business. Her paternal grandfather was a mathematician in Italy (“one of the 10 greatest mathematicians at the beginning of the 20th century,” says Qualcomm founder Andrew Viterbi) and the only such professor not to sign the oath of allegiance to fascism. During the war, the Volterra clan went into hiding, finding refuge in a local cellar (after being rejected by a hotel owner). The doc’s emotional climax is a reunion between Hava’s Aunt Viviana and the family that harbored her 60 years earlier.

The biggest turn off here is the implicit notion that Volterra’s family is more unique or worthy of exploration than other families, a belief that becomes almost self-congratulatory when an Italian friend of Hava’s parents says, “All the Volterras, when younger, were a little bizarre.” Well, gee, aren’t we a special family? While it’s true that Hava’s ancestors lived through some interesting times, they’re hardly bizarre. And if they were bizarre, it’s an assertion unproven in the movie, and one that shouldn’t require the audience to think as highly of the Volterra family as Hava does. Hava’s father was certainly not bizarre, but his depiction here is the most full-bodied of all those profiled. Vittorio was a physicist and non-stop smoker who wouldn’t put down his cigarette long enough to handle highly flammable liquid hydrogen. He was such a hardcore smoker that Vittorio’s girlfriend (Hava’s future mother) would only agree to marriage if he quit smoking. In 1952, Vittorio moved the family to Israel, where Hava would be born. She came to the United States at age 21.

While Hava probably gained a lot from the experience of making The Tree of Life, the audience will gain demonstrably less. There’s a missed opportunity for resonance beyond yet another story of Jews during World War II. Each of us is here for an infinitesimally brief time, but instead of gaining solace in the knowledge that her antecedents were present in this world, she instead proves they were influential and important. It’s a fine distinction, but it’s a little piece of universality that Volterra’s doc is crucially missing.