on September 09, 2008 by Shlomo Schwartzberg
Print 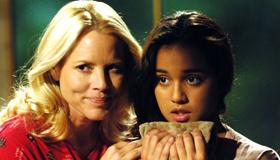 Initially titled Nothing Is Private, Towelhead is nothing if not topical, tackling in turn such hot-button issues as pedophilia, racism, patriotism and the sexual coming of age of a 13-year-old Christian Arab girl named Jasira (Summer Bishil).

As the movie begins, the pliable Jasira has just allowed her mother’s sleazy boyfriend to shave her pubic hair. Soon enough, she’s shipped off by her no-account mother (Maria Bello) to her patriarchal father (Peter Macdissi) in Texas, a NASA employee who also has no idea how to raise a precocious daughter and can only respond by abusing her whenever she acts, in his view, in an inappropriately “sexual” manner.

Meanwhile, a creepy Army reservist (Aaron Eckhart) awaiting shipment to Iraq ends up deflowering the girl, who also is forced to deal with bigoted schoolmates who torment her incessantly and an older classmate (Eugene Jones) who is coercing her into sex.

Director Alan Ball, creator of Six Feet Under and the screenwriter of American Beauty, is making his directorial debut here and, unfortunately, borrows a lot more from the crass, misogynistic American Beauty than he does from the humane, subtle Six Feet Under. Too much of Towelhead is pitched on a hysterical, one-dimensional note, with Jasira being consistently mistreated in one way or another by pretty much everyone she encounters—a reverse Candide for our cynical times. Worse, Ball shoots the “seduction scene” in which Jasira is raped in a prurient, leering fashion—in short, as with Kevin Spacey’s character in American Beauty, who was obsessed with a 17-year-old virgin—getting off on what he is ostensibly condemning. Only Toni Collette as Jasira’s concerned neighbor, who tries to protect the girl, is allowed to play her role with any depth and humanity.

Near the end of the movie, Ball does dial it down and begins to impart his film with some semblance of sober thought. But it’s not enough to wash away the sour taste of what’s come before.