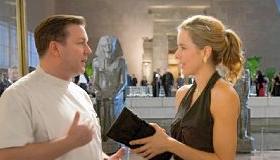 Until now, the great and tragic irony of David Koepp’s career has been his seeming inability to get to direct his own best material. That the man who wrote the likes of Death Becomes Her, Jurassic Park, Mission: Impossible and Spider-Man (to name only a few) for other directors has forged a directing career on such fare as The Trigger Effect, Stir of Echoes and Secret Window has long caused many to wonder when Koepp might finally save something really worthwhile for himself.

Let the wondering end - for with Ghost Town, that day has finally arrived. A charming throwback to the very best kind of Hollywood tradition—a romantic comedy that’s both romantic and comedic—Koepp’s new picture looks well positioned to become one of the first mainstream hits of the fall, in the process heralding a new chapter in his career as a filmmaker.

Since Charles Dickens first authored A Christmas Carol, stories in which misdirected lives were realigned through supernatural intervention have proven consistently popular in both literature and the movies. Koepp’s Ghost Town, however, is more than simply a regurgitation; while it clearly pays homage to a variety of antecedents—everything from early classics like It’s a Wonderful Life and A Guy Named Joe to more recent favorites like Ghost and Groundhog Day —its view on human relationships is surprisingly direct, even edgy for a studio comedy.

In his first substantial Hollywood starring role, British comic Ricky Gervais plays Bertram Pincus, a dour, disconnected New York dentist so disdainful of humanity that he shuns even the simple act of sharing an elevator. That all changes in an instant after a routine medical procedure leaves him temporarily dead for seven minutes, just enough for Pincus to now find himself between worlds; the familiar Manhattan in which mortals simply annoy him is now flowing with a new population of deceased spirits, all of them desperately soliciting him to help broker the closure that will enable them to move on to the next world.

While the ghosts are clearly harder to ignore than the living, it’s a task Pincus is more than up to until one such spirit—a dead businessman named Frank Herlihy (Greg Kinnear)—promises to make the other ghosts leave him alone  if he stops Frank’s widow Gwen (Téa Leoni) from remarrying.

Where the film goes from there is hardly original stuff, so it’s to Koepp’s credit—and that of his co-writer John Kamps—that he doesn’t try to throw the audience any red herrings. Instead, he focuses on the areas where romantic comedies are typically anemic—making the characters feel real, extracting performances that strum the heartstrings, evoking deeper emotions with which to enrich and enliven the laughs. The result is a rare and unexpected gem which, though not groundbreaking, should serve to eviscerate a good portion of the post-summer doldrums to which studios have become accustomed. Gervais, in particular, is inspired casting, bringing a level of pathos to the part that a higher tier of American comedy stars rarely achieve. The always-underrated Leoni—who too often seems to get stuck with the hand-me-downs of other actresses—absolutely shines as the hard-hewn intellectual with a wounded heart. Kinnear and the remainder of the supporting cast have fewer opportunities to stand out, but consistently make the most of what they’re given, in large part because Koepp appears to care about each and every one of them.

That pervasive sense of the humanistic, along with judicious use of, but not overreliance on, special effects and some exceptionally clever staging of actors—especially in moments when Pincus is forced to interact with the living and the dead at the same time—should earn Ghost Town some fast and furious word of mouth. The fact that distributor Paramount has already been able to market the film successfully without divulging even a hint of its actual plot is also a plus, insuring stronger-than-expected audience reaction well into the early holiday season—a rare, celebratory moment for both studios and audiences, although not necessarily for the other directors who will now quite likely have to find themselves another writer to burnish their ideas.