close
If we’re all one, who needs you? 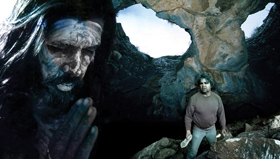 Scattershot, often beautiful to look at and just as often earnest to the point of self-parody, actor turned documentarian Kim Kindersley’s impressionistic ode to whales and the indigenous peoples who love them is an occasional eye-opener despite a serious kumbaya factor; it’s not really designed for mainstream audiences, but it wouldn’t be a complete a surprise if it attracted attention beyond the arthouse circuit anyway.

Whaledreamers’ central focus—if a film this loosely structured can be said to have one—is The Gathering, a 1998 event in which 85 tribal leaders from around the world came together in South Australia to share stories (often about the titular whales) and strategies for dealing with the modern world. Kindersley uses this as a jumping off point to tell the story of one indigenous culture in particular, the aboriginal Mirnings, whose mistreatment over 300 years of Ozzie history in this context recalls Gandhi’s answer to the question of what he thought of Western civilization: “It would be a good idea.” Along with that, we get lots of quite gorgeous underwater photography of the aforementioned whales and their dolphin buddies, a truly disturbing subplot about a Columbian tribe that managed to save itself from the predations of the Occidental Oil Company by threatening to commit mass suicide, and far too many portentous uses of the phrase “a deep spiritual connection” on the soundtrack. A lot of this is genuinely powerful—even heartbreaking—stuff, and Kindersely, to his credit, doesn’t pull his punches about one tribal group that actually kills whales without any help from the outside world. Still, after what seems like interminable footage of pasty-faced white guys tarted up in tribal paint, the jarring inclusion of an anti-Iraq war sequence and cameos by the Dalai Lama and Pierce Brosnan, one would basically need a heart of stone not to laugh at least a little at the film’s overall mood of New Age piety.