close
Despite a risque title, there's nothing too controversial about these Young People

on September 03, 2008 by Shlomo Schwartzberg
Print 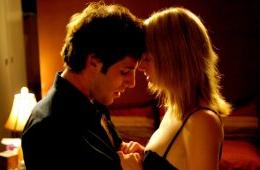 Five different vignettes, centering on sex, couples and the different circumstances surrounding their needs and feelings.

There’s the couple whose sex has become stale; the roommate trying to entice his buddy into a threesome; the exes trying to re-connect; the friends who are thinking of sleeping together; and the pair on their first date. Despite its provocative moniker, Young People F---ing is actually a pretty staid affair, showing much less nudity than most R-rated films and coming down firmly, for the most part, in the pro-monogamy camp. It does offer some snappy dialogue, an attractive, generally talented cast—top marks to Carly Pope as the cynical friend who thinks she can keep emotions out of her tryst with her best male friend—and some amusing situations. It doesn’t, however, cut too deep. Think Friends with a little more skin and a few four letter words and not much more than that.