close
This doc is worth singing about 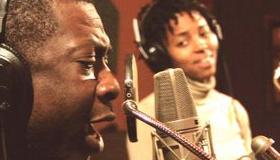 Hearing Senegalese vocalist Youssou N’Dour’s chops, it’s clear the guy’s got a gift. Throngs would head to the mosque for prayer, as his voice sounds two parts Muslim cantor and one part calypso soloist. No surprise that this troubadour would undertake a demanding pilgrimage by seeking out offspring tunes hatched in places like Louisiana or Atlanta. During slavery, large swaths of Senagalese were snatched from Youssou’s native port city and subsequently many musical masters landed in blues and jazz joints throughout the States, the Caribbean and Europe. Bound by honor and a search for self-identity, the artist amasses a most uncanny troupe, performing at various pits tops before returning to Africa, where the music’s roots rekindle. In Youssou N’Dour: Return to Gorèe, too many touching moments gel to discount the picture as small time. The film will indoctrinate many not yet hip to the struggle from the other side of slavery’s shores and has the potential to be a panacea by the sheer goodness of good beats.

Home is a city known as Dakar, where the tiny island of Gorèe is a far, far call from the New World’s Ellis Island. A way station of sorts in darker days, it provided Cuba, Haiti, America and other powers with human laborers. Known as the “door to the journey of no return,” its spooky halls create a chilly pang for young students touring the grounds. An elder meets with Youssou N’Dour while a circle forms, jamming to a fast rhythm of drums, bongos and even kids tapping makeshift wooden crates. The wise man and the contemporary alike discuss the journey ahead. Granted a blessing and told that all of Africa is behind him, Youssou ventures out with a satchel of songs and a mission to recruit a band. He taps Swiss piano player Moncef Genoud, who is blind. Together, they travel by plane (not by ship), and land in slavery-scarred Atlanta. The pair is to gig at an evangelical church. Immediately, there’s static because the house
a capella group misinterprets the African singer’s song by superfluously sprinkling some Christianity where it wasn’t called for. This doesn’t bid well for the artist, who has to tell them that his song “My Hope Is in You” is agnostic and touches on children going to school. “It’s not about religious stuff like Jesus or whatever,” Youssou jabs. The performers known as the Harmony Harmoneers, comprised of middle-aged black men—some pastors—agree to sing the number sans “Jesus.”

What is quite endearing is how Youssou tries to discover how the tones and trebles back home are echoed out in the States and even Europe. He jams with a New Orleans drummer named Idris Muhammad, who takes him through town— confessing that he was a bit of a misguided youth. When they play together, it’s as if all the talk—however minimal—gets upstaged. The conversation with instruments flows and carries a charisma that lingers even in silence. When the drummer is cueing up, a new arrangement the upright base picks up on it and a synched sound comes alive. Together and throughout the picture, the musicians talk more with instruments than with words.

Clearly, the African-in-Modern-America premise plays on how deeply estranged, and yet linked, the cultures are. Estranged because of the manner in which Youssou speaks is quite direct and spiritual. Most of those with whom he interacts may stride with the hymns and scriptures, but there is a swagger in the man that cannot be replicated. Youssou maintains a heavy amount of confidence while he’s in the big land of Hummers and hot dogs. You almost can read on his face that he will go that much farther in order to prove he belongs on the same stage as the next man. The confidence commands respect, but at times he hedges too far and turns arrogant. The moment this happens, however, he pulls back and navigates his blind pianist to the WC and helps a sprouting NYC-based female singer learn lyrics in his native tongue with utmost patience and warmth.

While in New York City, the crew records a collaborative album. Lo and behold, the revolutionary poet laureate himself Amiri Baraka, makes his cameo writing some lines on-the-fly that puncture the film’s core. Here you have this slick musician from Mother Africa getting a lesson from an urban chief in his own right. And soon enough, Youssou is front and center at Baraka’s house alongside a bevy of artists for a night of expression and fuss-making. At one point, it’s as if Baraka scoops Youssou’s brain and eloquently booms, “If you don’t know your history, you could be confused permanently.”

Youssou takes a hard line toward the prim and proper ways of the West by ripping the skirt off the civilization its founded. Blues and jazz are comprised of complete utter disrespect of the norms so defined by the West. Whatever place the society put the African decedents in, the music has always had free rein to rebuke the conventional. Youssou quips, “African music has no standardized norms.” In a sense, there is a crystallization of this, because he is constantly floored by how familiar the music is when he chills at a speakeasy in New Orleans or marvels at those who play instruments with such passion and skill during a stint in Luxemberg. Upon returning back home with his newfound friends and co-creators, Youssou sees and hears things that he didn’t realize existed before. It takes him a long journey to enhance his senses and achieve this piece of mind.

At the core of the film is the raw nugget that is one a man’s quest to know. And yet there is a flooding of discouragement that inevitably undercuts the progress. He finds that not all the relationships are going to achieve exactly what he hopes they would. Whenever Youssou reaches epiphany, he is back down on the bottom of the sand hole.

The serious undertones of the film are very real and played out with rapture. Slavery happened here. The elder chief goes so far as to accuse the thievery of their brothers and sisters (who were the cream of the crop) and blames the continent’s competitive disadvantage on this indelible stain on culture. Technically, the film is guided by Youssou’s music and heavy-hitting orchestra. The camera doesn’t skimp on much and manages to hold on quiet moments. That kind of discipline in post is critical for any storyteller who cares to do more than just hit plateaus. Helmer Pierre-Yves Borgeaud holds his own and portrays the singer in vulnerable spots so often that one must applaud him for having the guts to keep them in the final cut. Moreover, the work is sensual and timeless. There will be many who will learn about how beauty can be rendered out of the most hideous of histories.