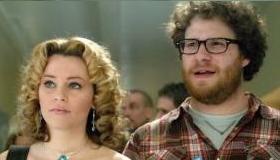 While he paved the way in certain respects, it feels as though Kevin Smith is jumping on the Judd Apatow bandwagon in his latest, which stars Seth Rogen and Elizabeth Banks as best buds and roomies who discover they’re in love after making a blue movie to raise much-needed cash. There’s more yakking than screwing, and the result is flaccid and formulaic enough to remind you how mundane porn flicks are when physical stimulation gets taken out of the equation. That Smith insists on turning an explicit sex farce into a sincere romantic comedy is more deflating than any lack of finesse. The attention-getting title and smutty nature of the proceedings, together with Smith’s reputation and Rogen’s popularity should generate significant action, but the picture’s ultimate sappiness will temper word-of-mouth business.

Much of the semi-cerebral dialogue feels strained and too often Smith falls back on racial and sexual stereotyping. The awkward moments outnumber the genuinely funny bits, which are mostly traceable to Rogen’s likeable persona. Smith needn’t flash his own credentials for championing bearded, slacker shlubs. He can be considered a charter member of the Teddy-Bear-as-Romantic-Lead Club. Still, did Knocked Up, Superbad, and Forgetting Sarah Marshall not make it to Smith’s corner of New Jersey, or did he study them too closely? Either way, the balance between raunchiness and humaneness, so carefully calibrated by the Apatow machine, is out of whack.

The derivativeness starts with that old standby, the high school reunion. It’s a frigid Thanksgiving Eve in the Pittsburgh suburbs and lifelong friends, longtime apartment mates and fellow losers Zack and Miri are unenthusiastically prepping to visit their old stomping grounds. Neither has much to show for the intervening years. He’s a barista at a Bean-N-Gone coffee house franchise owned by a foul-mouthed Indian; and whatever Miri does it’s not lucrative since they struggle to pay the rent and utility bills. She’s bent on hooking up with her school crush Bobby (Brandon Routh), who turns out to be gay and living in L.A. with his porn-star boyfriend (Justin Long). Judging by Long’s excruciating caricature, neither he nor his director have ever met a gay person.

Soon it dawns on Zack and Miri that they can raise funds by shooting and distributing their own adult movie. In the backyard, do-it-yourself vein of Mickey Rooney and Judy Garland, they hold auditions and assemble a crew that includes Tracy Lords, Smith regular Jason Mewes and Craig Robinson as Zack’s henpecked African-American co-worker. They take the leading roles themselves and their on-camera coupling opens the feeling floodgates and relationship blather that Smith has telegraphed from the outset.

Although there are a few humorous riffs, the banter never sounds completely authentic—more like a filmmaker venting than two people naturally discovering their romantic compatibility. Maybe the material would be less tiresome if Smith hadn’t appealed the initial NC-17 rating and done the necessary trimming to earn an R. In any case, the basic problem is that the crudity and titillation are in the service of such a conventional story. The ickiest occurrence is Zack and Miri falling for each other. More carnal and emotional sparks fly between Rogen and James Franco in Pineapple Express than Rogen and Banks, though both actors are blameless. The way Smith contrasts Zack and Miri’s domestic situation with Zack’s colleague’s marriage—having a sassy black woman haranguing her husband—seems more demeaning than any of the sex acts or talk.