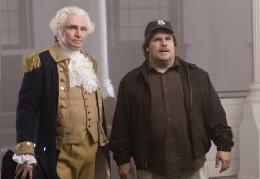 Pity conservatives. They've got the lamest politicians and the lamest comics. Outrage and bluster make for fine pundits, but as Jon Stewart and Stephen Colbert have proven, brilliant political humor takes restraint and class. Naked Gun director David Zucker is rarely associated with the latter; his latest, an airless send up of liberal values, ensures it. The dwindling class of right wingers who align with Zucker's hawkishness might applaud his politics, but likely from the safety of their couches, miles away from the nearest theater.

Kevin P. Farley, a veteran comedian stuck doing negligible walk-ons even in his late brother Chris' movies, by virtue of his girth has ascended to star as Michael Malone, a translucently-veiled documentary filmmaker from Michigan with a passion for Twinkies and pissing off right wingers. Malone's latest crusades are a troop-bashing film and a movement to ban the Fourth of July. On July 3rd Eve, he's visited by John F. Kennedy (Chriss Anglin) by way of Jacob Marley who rather than mumbling through a doorknob interrupts a rerun of his inaugural address and climbs out of the TV to point out all the tough talk Malone and his cronies have forgotten. (That fact Kennedy's promise to "oppose any foe" resulted in the Bay of Pigs is conveniently overlooked here.) Kennedy warns that Malone will be visited by three ghosts. I only counted two, but hey, numbers have truthiness. The heavy conscience-lifting is born by Kelsey Grammer's George S. Patton, who takes Malone on a whirlwind tour of his past, present and future—an ease of plot structure Charles Dickens didn't consider—and for good measure throws in some past and present stuff Malone wasn't enlightened enough to have been around for, such as that time British Prime Minister Neville Chamberlin (Oliver Muirhead) shined Hitler's boots. Zucker and Patton's strategy is a defense of war—not of the war on terror, though Malone learns that if we hadn't fought the Civil War, he'd own Gary Coleman as a slave, and that if we don't fight Iraq (or Al Qaeda, same difference) Hollywood will be renamed Bin Laden Land. Meanwhile, Malone goes on an ACLU zombie killing spree, gets recruited by terrorists, and learns to love his enlisted nephew Josh (Travis Schuldt) and his fleet of tiny sick kids, who would get better health care by pestering their dad to vote for Obama.

Conservative actors John Voight and Dennis Hopper—fine Americans who deserve to have their opinions heard, not like that traitor Barbra Streisand—are members of Zucker's right-wing schmooze group who deign to make cameos. (The gang must not have many writers—the best credits co-writers Myrna Sokoloff and Lewis Friedman have on their resumes are awards shows.) Less surprising are country singer Trace Adkins as himself/The Angel of Death and a pirouette by Bill O' Reilly playing himself against a fake Rosie O' Donnell (Vickie Brown) whose claim that Christians are war-mongering zealots is followed by a montage of shoe-bombers for Jesus that would be hilarious except Bill Maher's Religulous does it better. Putting politics aside as much as you can for a film that holds them central, Zucker just ain't funny. As entertainment, An American Carol ranks below YouTube clips of Sarah Palin. The fact that (Diebold-willing) Palin might make it to the White House is no laughing matter—even if it precludes Zucker from making a sequel.