close
A restoration that’s crisper and clearer, but just as tricky to read 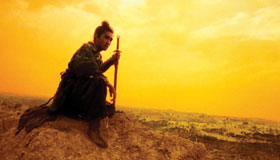 Though shorn of seven minutes from its original release length of 100 minutes, this new and improved “definitive” cut of Wong Kar Wai’s 14-year-old Ashes of Time —which includes new music and digitally restored picture—isn’t likely to change the film’s reputation with either detractors or fans. The wash and wax has definitely given it a flashy millennial look, but Wong’s lyrical stream-of-consciousness prequel to Louis Cha’s legendary novel The Eagle-Shooting Heroes remains a typically impenetrable, albeit beautiful, meditation very much on par with the rest of Wong’s oeuvre. Sony Classics’ limited release has been designed primarily to reach out to the director’s die-hard fans and, perhaps, a few arthouse curiosity seekers—a smart move insofar as any money spent trying to reach the action/martial arts set (whose reactions would range from perplexed to downright negative)—would be money wasted.

For just shy of a generation, those fortunate enough to have seen Ashes of Time probably saw it on a fifth-generation bootleg VHS with barely-legible subtitles or, if they were lucky, a third-generation, badly-worn print with extreme color fluctuation and embarrassingly bad subtitle translation. That alone makes Ashes of Time Redux noteworthy—not only is this one of the most visually sensual productions of the Hong Kong New Wave period, it’s one of the least self-conscious martial arts films ever made. As Wong has explained it, the idea was to examine the characters from Cha’s mystical period novel in a kind of freestyle prequel, imagining how they might have lived and interacted prior to the events described in the book. The resulting film plays like something of a cross between a Chinese Spaghetti Western and Alain Resnais’ dreamlike Last Year at Marienbad.

The late Leslie Cheung stars as a mysterious desert hermit who, over the five seasons of the Chinese almanac, interfaces with a variety of hired killers and beleaguered women—their fractured relationships explored in a series of neo-philosophical existential episodes which become increasingly formless and incomprehensible as the film goes on. Cheung’s calculating Ouyang Feng is a bewitching and mystical figure of complex and disturbing moral vagaries. Into his world drifts sometime friend and rival Huang Yaoshi (Tony Leung Ka Fai), the woman who betrayed him (Maggie Cheung), the vengeful Murong Yin (famed androgyne Brigitte Lin in a double role), a blind swordsman (Tony Leung Chiu Wai) and his wife (Carina Lau), and plenty more. Making sense of it all—even in an episodic fashion—is fruitless. There is little to no linearity here as the film steadily lives up to the promise of its title—a tale less concerned with narrative cohesion than creating a kind of visually intoxicating tone poem from the faded remnants of its fictional characters’ memories.

From a technical standpoint, the film has never looked or sounded better—the digital punch-up does wonders for Chris Doyle’s photography, arguably one of his better collaborations with Wong—all of which very nicely flatters the all-star cast of Hong Kong superstars. By contrast, the concurrent 1993 production of The Eagle Shooting Heroes —a parody based on the same characters and starring virtually the same cast that’s only just been released to DVD—looks more dated and ridiculous than ever.
The real test for Ashes of Time Redux, however, will come upon its DVD release when a far broader swath of Asian film fans, many of whom have only heard of the movie, will finally weigh in on what is arguably the most unusual film of its type and era. That the debate over the original cut has raged so fiercely for more than a decade suggests that broader exposure won’t put the matter to bed any time soon.