close
Chihuahua won't be barking in theatres for too long 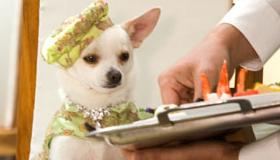 What looks certain to be a slophouse of racial cliches is merely a sloppy, inoffensive kiddie flick starring the world’s most patient chihuahua and the voices of every Spanish speaker north of Tijuana, including George Lopez, Andy Garcia, Cheech Marin, Paul Rodriguez, Placido Domingo, Luis Guzman, Edward James Olmos and even radio host and billboard superstar Piolin. Writers Jeffrey Bushell and Analisa LaBianco don’t know enough about Mexico or 90210 to skewer either well. (They still think a posh pup would say, “Talk to the paw,” a catchphrase that went passé long before its lifespan.) As a mediocre theatrical release, it will be put to sleep within weeks, but should resurrect its reputation with modest DVD sales for canine-obsessed children.

Drew Barrymore is the voice of Chloe, a snow-white Chihuahua princess who never leaves the yard without a frock, hat and shoes. Owner Jamie Lee Curtis is a single, childless millionairess; simply to have something to do, she shuttles Chloe from spa days to play dates with the focus of a parent trying to prep their kid’s college applications. (A doggie birthday party where the pups frolic on a moon bounce scores the biggest laughs.) If Chloe were, say, 10 cats and not a teacup purebred, Curtis’ fixation would be played for laughs or pathos. But director Raja Gosnell frames the dog’s luxe life like an episode of My Super Sweet Sixteen —a dash of shock and a whole lot of awe. If the film ever did play in Mexico—or say, stateside four years after a McCain win, Chloe’s Harry Winston diamond collar and her dinner menu would be as incendiary as “Let them eat steak.”

Still, Curtis is a very nice person—we know this because she adores her Mexican gardener Sam (Manolo Cardona, a green-eyed Columbian). Chloe is much less impressed with his canine counterpart Papi (Lopez), though he’s skilled at digging the holes that make their yard gorgeous. Papi, of course, is in love with the snob. His expressions of passion range from ranchera croons of “Mi amor, mi corazon,” to poetry like “Her ears are as pink as a sea shell ... her nose is a raspberry.” When Curtis leaves niece Rachel (Piper Perabo) in charge for a week, the two pampered darlings sniff each other out like beauty pageant rivals. After Rachel refuses to order Chloe room service at their resort in Baja, the dog storms out, only to get kidnapped by a dog fighter named Vasquez (Jose Maria Yazpik) and shuttled from Mexico City to Puerto Vallarta to, yes, Chihuahua, protected from Vasquez’s lieutenant, a Doberman named Diablo (Olmos), by a former K9 German shepherd (Garcia) who, in an emotional scene reveals that he—sniff—lost his sense of smell. Meanwhile, Papi, Sam and Rachel join forces to find the dog, both script and characters oblivious to the impossibility of finding a Chihuahua in Mexico, which by my thoroughly scientific calculations is like finding a needle in a hay field, as Chloe undergoes a political awakening and realizes she needs to “Find Her Own Bark.” (Her current bark sounds like sneakers on a gym floor.) Ultimately more interesting than the rote plot is the amiable cluelessness of the flick to reference all things pop culturally “Mexican,” from Scarface quotes (Cuban) to the cast which, with the exception of Sinaloa-born Paul Rodriguez, is from everywhere but Mexico including Puerto Rico, Cuba, Spain, Columbia and California. Like CNN, the film assumes it needs nothing more than our unlimited interest in the drama of a white female gone missing in a foreign country.