close
Canadian charmer might do better on the tube 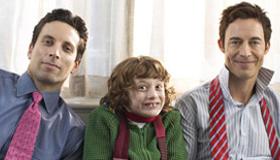 Breakfast with Scot is a sharp little Canadian drama that draws one in rather wryly before revealing exactly what it’s about. This is not subterfuge on part of the filmmakers, but rather, part and parcel of the underlying point, which is; you cannot judge a book by its cover, no matter how flamboyantly gay or decidedly straight that cover happens to be. That said, its current theatrical release notwithstanding, Breakfast with Scot is not really a theatrically releasable film. It would play better on the small screen, where its audience (which is particularly, though not uniquely, gay) would find it more easily, and with some expectations regarding its subject (because TV listings and DVD boxes do that). While edgy, Breakfast with Scot is not remotely offensive—not even a little. One imagines DVD is where this little gem will garner most of its return.

The flamboyantly gay character herein is a 10-year-old boy called Scot (Noah Bernett), who—after the sudden death of his mother—finds himself living with two men, Eric (Thomas Cavanagh, of TV’s Ed ) and Sam (Ben Shenkman, Then She Found Me ), to whom he is not actually related. This kid is incredibly gay. We’re talking Liza-Minnelli-Fan-Club gay, except that no 10-year-old, even a gay one, has any idea who Liza Minnelli is—and yet he is that gay. Then again, so are Sam and Eric, although they are fairly careful about not broadcasting the nature of their relationship, and the two just don’t “seem gay.” Indeed Eric is a former Toronto Maple Leaf who was known for beating up other players—a practice that’s apparently not very gay.

The complicated machinations that bring Scot into the care of Eric and Sam are far too specific—and frankly, arbitrary—to bare disentangling here. Suffice it to say, Eric is no more equipped to handle a demonstrably gay child in the contemporary worlds of work, school and family than a decidedly straight man might be—which assumes not-gay men would not know how to deal with caring for a gay child (which strikes one as fairly hetero-phobic, even if it’s probably true).

Interestingly, the moments of purposeful homophobia in Breakfast with Scot, for the most part, come from other children. They are parroting adults, of course, but it’s the kids who are, in fact, the most vicious: the adults in the film are mostly disinterested or oblivious. That said, even the ones who let the other F-word float as freely as the most banal adjective (or noun, depending on its use) eventually come around. As might the few theatrical audience members who stumble into this neat little film and stick around after they figure out what it’s actually about, which is this: whom we love and whom we call family are a matter of choice, while other things are not.