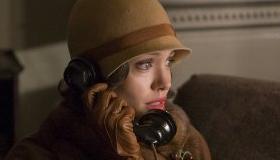 This incredible true-life yarn told in a gripping and masterly manner by Clint Eastwood finds Angelina Jolie, after her impressive portrayal last year of Mariane Pearl in A Mighty Heart, responding robustly to the demands of playing a single mother under siege from all sides.

Some stories need room to breathe. Changeling is one of them—a point that Eastwood has taken to heart with a carefully paced narrative that exerts a powerful sway as each denouement is revealed. Despite the lengthy running time, the suspense and momentum does not let up for a moment as Eastwood confronts some of his favored themes, with the underdog facing the might of judicial, police and political corruption.

It is amazing that no one has thought to turn the events depicted into a film before now, particularly given their notoriety as the “Wineville Chicken Murders,” which were well documented at the time. Opening in Los Angeles in 1928, Christine Collins (Angelina Jolie) is seen saying goodbye to her son Walter, who’s being left at home as she goes off to work for some unexpected overtime.

On her return, she discovers he has vanished. Frantic and continuous searches over a period of weeks produce no clues as to his whereabouts. Then, strangely, the police find a boy who claims to be Walter. In a welter of stage-managed publicity, the boy is returned to Christine as the cops seize the moment of glory—yet she knows he is not her son.

Christine, a telephone company supervisor, then has to surmount all manner of obstacles to find out the truth—not least the attempt by the police to besmirch her reputation by placing her sanity on the line as a hysterical woman whom they engineer to commit to a mental asylum. Enter John Malkovich as a campaigning minister who uses his weekly radio show to highlight the case and also the dubious conduct of the police department. He becomes a crucial ally.

Up to this point, the film has rested squarely on Jolie’s shoulders, but as the threads begin to unravel and her unshakable faith gains focus, it opens out. When a teenager (Eddie Alderson) tells the authorities about the horrific murders of some kidnapped boys in Riverside County, all perpetrated by a creepy young man (Jason Butler Harner), the scene is set for a serious confrontation with the city powerbrokers and the upholders of public order and decency.

A lesser filmmaker might have been tempted to sensationalize further the already shocking events, but Eastwood knows intuitively that the story can speak for itself and adopts a measured approach. All the supporting characters have been meticulously cast while the sense of place and period (lensed by Tom Stern) have been authentically recreated.

The aftertaste is of a richly satisfying film made by a craftsman at the peak of his directorial powers.