close
This City is worth paying a visit to 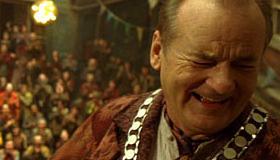 A live-action family fantasy that harkens back to the golden age of Disney and gripping adventure flicks like In Search of the Castaways but also merges that tradition with the hip factor of Harry Potter -style storytelling. Based on a classic children’s novel, this movie version, in which a couple of young people set out to save the citizens of a dying city, has not been the beneficiary of a lot of hype and thus may find itself facing stiff competition at the box office. Best bet for success for this handsome and exciting production from Walden Media and producers Tom Hanks and Gary Goetzman’s Playtone will be later on down the line in DVD, where it actually could become a cult item for legions of kids.

Ember is a city of dazzling lights, built to last 200 years and serve as a kind of utopia for its clueless citizens. Corrupt government has put it on the path to disaster and its once famed electrical prowess is now going limp, its generator starting to fail and the city threatening to fall into darkness. When Lina (Saoirse Ronan) and Doon (Harry Treadaway) discover an old metal box with age-old secrets for escape and survival, it sets them on a path to find a way out of Ember and into an outside world they have been forbidden to see or know. Their discoveries and actions eventually hold the key to the fate of the entire citizenry, who are being kept in the dark in more ways than one.

Dazzling production design, costumes and cinematography highlight the considerable achievements of this entertaining and original kids film. Cleverly conceived and imaginatively directed by Gil Kenan ( Monster House ), the story actually has great pertinence and timeliness for today, when so much of society seems to be falling into a dark chasm. Youngest audience members will love the adventure as Lina and Doon use everything in their power to break through the bureaucracy of a corrupt mayor (Bill Murray) and his henchman (Toby Jones) and lead their fellow citizens to a new beginning away from the all enveloping government, which finds itself hurtling out of control.

It’s a shame there hasn’t been more marketing support thrown behind this worthy enterprise, as live-action family films on this scale are becoming rare birds these days. Murray is wonderfully shady in his role as the duplicitous mayor, while Jones hits all the right notes as his number two. Tim Robbins is properly perplexed and unnerved as Doon’s brilliant but bitter inventor father, and Martin Landau is ideally cast as the wise old sage Sul, Doon’s boss in the pipe works of the city. As Doon and Lina, the heroes of the story, Ronan (an Oscar nominee last year for Atonement ) and Treadaway are the perfect pair and have the audience completely on their side for the entire breezy 95-minute running time.

With a little luck and nurturing City Of Ember will find its way into the light of the multiplex, where word of mouth could give it an extended stay.