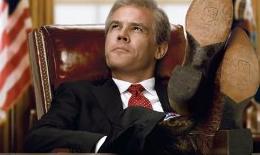 “Controversial” has been the watchword for the work of director Oliver Stone almost since the beginning of his career. From his directorial debut, the little seen Last Year in Viet Nam (1971), through films including but not limited to Salvador (1986), Wall Street (1987), Talk Radio (1988) and, of course, his most biting, JFK (1991) and Nixon (1995), Oliver Stone films have been known for walking along, stumbling across and scrubbing out the line that separates acceptable license in fiction filmmaking and outright making things up. Truth be told, Ollie hasn’t been particularly controversial for sometime now. World Trade Center (2006) was downright patriotic (if not very compelling), and mass-appeal flicks like Alexander (2004) and Any Given Sunday (1999), with their gay over- and undertones amounted to little more than run-of-the-mill studio poo; controversial only in that they were so  bad. W. may fairly return the mantle of “maverick” filmmaker to Mr. Stone, though he and screenwriter and long-time associate Stanley Weiser have resorted to making a few things up again. Still what’s most interesting about W. is that the bits cut from whole cloth are those that offer the film’s titular “protagonist” the benefit of the doubt. Benefit enough, this critic thinks, that money will be made in both red and blue states—except Texas. They’re going to hate this movie in Texas.

Opening with a youngish George W. Bush (the not-young-enough Josh Brolin nevertheless has the body to pull this off) in the midst of a fairly brutal hazing involving alcohol and underwear as a Yale undergrad pledging his father’s fraternity, Stone has W. displaying an astounding feat of memory and the ability to work under pressure. One supposes there are ways that the filmmakers might have found corroborating eyewitness accounts for this four-decades-old event. If it ever happened at all, it is an example of the filmmakers offering the 43rd president the benefit of previously mentioned doubt. It’s Stones way of saying, “He’s not that dumb,” or perhaps it’s his way of saying, “He’s not that dumb”—either way, it’s not the most apocryphal moment in the movie.

In short order, we find ourselves in a rather elliptical film that moves back and forth through time loosely encompassing the period ranging from George W.’s wild and raucous youth in the oil fields of West Texas to the period when things begin to go badly in Iraq, including most of the major events in between. We see the future president’s first failed run for Congress, in which he’s labeled a carpetbagger and declares that will never happen to him again. We see him as a young operative in Bush Senior’s White House, where he witnesses his father win a war and lose an election; which he declares will never happen to him. We see him in the Texas good-old-boy network with Karl Rove (Toby Jones, The Mist ), where he aggregates to guide the would-be heir to the Bush legacy first to the State House and finally to the White House, by whatever means necessary. Amidst this, Stone and company are not without opinion or insight. What they reveal is a collection of individuals who are in fact ruthless, diabolical and determined well beyond what might be considered fair game even in the world of high-stakes politics. These people, by Stone’s measure, are dastardly right down to the moustache wax.

When W. finds itself in relatively contemporary times (post 9/11), the nation is reeling and angry, and decisions are being made that will affect the future in which we now reside. What Stone postulates is a cabal that is hell-bent on doing two things—going to war in Iraq and winning a second term.

As the film takes us inside the War Room and Oval Office, where we witness meetings between the Cabinet and the president as well as between the president and individual members of his administration (particularly Richard Dreyfuss’ Dick Cheney), we are offered a president who is less bumbling than simply ill-informed and fundamentally incapable of understanding nuance—not that any nuance is offered. Indeed, it is the Masters of the Universe, including Cheney, Wolfowitz (Dennis Boutsikaris), Rumsfeld (Scott Glenn), Rice (Thandie Newton with prosthetic mouthpiece and mole) and Tenet (Bruce McGill) who offer the homey bromides that George W. not only endorses, but actually manages to understand—“slam dunk,” et al. Brolin’s Bush, as filtered through Stone, seems to genuinely hope these simplistic reductions are true, and if they aren’t, that things will work out, anyway, since God is on his side.

God plays both a literal and metaphorical role in Stone’s W.. From the President’s well-documented conversion from dedicated heathen (in what the director plays as a literal and also apocryphal roadside conversion with blinding light and piercing chest pains that leaves the man a cold-turkey dry drunk and true believer), to his direct line to the Almighty who, not apocryphally, told George W. Bush to go to war. It’s surreal, and Stone plays it exactly that way.

If there is a single player on this stage who offers some measure of reason (since God was plainly irrational), and is thus the recipient of some measure of empathy, it’s Colin Powell, who as portrayed by the right honorable Jeffery Wright is thoughtful, sincere and, for the most part, duped. But this isn’t completely true—General Powell is ultimately held to one moment of accounting, a personal test that he fails.

Indeed, depending on one’s point of view, George W. himself is also offered a measure of backhanded empathy on the part of the filmmakers. Effectively, George W. Bush is summed up this way in Stones’ accounting of his life: W. is the story of a moderately intelligent, personally shallow, serial failure with a daddy complex whose driving impetus reflects nothing more than an unyielding desire for his father’s love.

While the life and times of George W. Bush are likely a good deal more complicated than that, for the moment, and in the context of a biopic, which are notoriously bad devices for this sort of accounting, that assessment will have to be good enough—if not particularly satisfying.