close
Flash is worth seeing only for Kinnear's performance 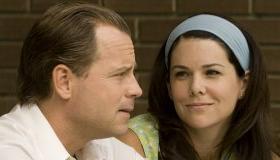 The longevity of the David vs. Goliath struggle is once again put to celluloid in the new film Flash of Genius. The year is 1953, and everyman professor Robert Kearns has been struggling to perfect and patent a new intermittent windshield wiper only to have his idea stolen by the monolithic Ford Motor Company. The resulting legal and mental struggle is a by-the-numbers tale that is based on true events, but not as dull as it sounds. However, convincing moviegoers to invest time in a mildly entertaining story that is better suited for DVD will most likely result in a small box office endorsement.

Professor Kearns is played by character actor Greg Kinnear, who usually stars in broad comedies, but excels in character dramas like As Good as It Gets and Auto Focus. His performance in Flash of Genius is the only thing keeping the film’s heartbeat going, as everything else—from the direction by Marc Abraham to its supporting cast of Alan Alda and Lauren Graham—remind viewers how its story structure and man-versus-the-establishment message has been done better many times before.

Flash of Genius covers Kearns’ life from 1953 to 1982, showing us the origins of his masterpiece windshield wiper all the way to the long court case against Ford and its endless army of lawyers. The movie tends to skip through many big gaps of Kearns’ life, especially his distanced relationship to his wife and kids. It’s understandable that sacrifices have to be made in the name of celluloid, but to have an abridged version of such an important part of our protagonist’s life is a serious misstep. As a result, we mainly see Kearns slowly and stubbornly lose everything, with his family and their role in all of this a mere afterthought.

Above all else, Professor Kearns is a proud man. His invention was revolutionary, and his betrayal by Ford catastrophic, but at the end of the day he’s not just looking for a monetary reward. In fact, there are many times when Ford has realized Kearns is as stubborn as they come and would rather buy him off than create a bigger headache. His response to the car company, “I want the credit. Will [you] acknowledge it’s my design?”

The film is a showcase for Kinnear to stretch his acting muscles and balance out his work as a comedian. He brings humanity and strength to the real-life innovator, but he’s also boxed in by a one-note story and by-the-numbers direction. Anyone familiar with other real-life David vs. Goliath stories like Erin Brockovich can guess how the story will turn out. But on the strength of Kinnear’s performance, I would recommend this middle-of-the-road picture—although the best way to view it may be on DVD.