close
Not as big as the rumors suggested 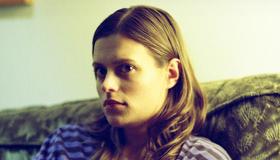 Love is pain, but so too is inertia. This debut feature by writer/director/actress Marianna Palka stars herself as an unnamed, unfriendly woman who captures the heart of the unnamed video store clerk (Jason Ritter) where she rents her nightly triple-feature of porn. Intended to be a mumblecore drama about emotional defenses and romantic persistence, instead the agonizing love story reads as alternately creepy, pathetic and damaging. Indie festival creds and a Sundance Screenwriters Lab pedigree will prod audiences curious about the film’s buzz to try to find depth in the protagonist’s shallows, but the film’s incuriosity about the causes of psychosexual frailty limit it to all fireworks and no spark.

Ritter plays a handsome ex-addict with a decent support network of slacker-fun co-workers and a recurring pattern of homelessness. He’s sweet, charming and stalkerish, though we can’t figure out why (outside of her strong-boned beauty) he’s latched on to Palka. To Palka, his conversation starters are as toxic as anthrax. When he finally worms his way into her apartment, weeping that his fictitious great aunt died, she greets him with a butcher knife. Slowly—very, very slowly—he crumbles her defenses by making her dinner nightly and bringing her porn free of charge, with the promise he won’t get an erection. When she, sight unseen, insults his package as being smelly and limp, he congratulates her for using the word “dick.” When she lashes out and pretends to rape him, he smiles and says, “I’ll take whatever you give me.” Yet Palka never gives us an opening to see her character as a cruel aggressor; she takes it on faith that we know—and care—that inside, she’s wounded. But Palka’s tidy chunk of backstory comes too late to register as anything more than a last-minute Hail Mary of bathos. Meanwhile, whatever’s lacking in Ritter that would foster such self-abuse here feels beside the point. His job is to play Ken to her Spiteful Bitch Barbie.

Though the story, like most mumblecore flicks, is a collage of bummer tales traded in the freshman dorms, the pic does show promise in its acting and cinematography. Palka and Ritter inhabit their characters so completely that you nearly confuse their comfort in the roles with complexity. Ritter has an eager, hungry face; he’s practically a starving dog, not a twentysomething dude. When he’s fortunate enough to hold Palka’s hand, you feel his joy radiate. As a director, Palka has an eye for authenticity—the bland LA apartments, growling traffic and isolation of living in a city that requires people to make their own happiness. Now if she could concern herself with why some people would rather stay miserable, instead of fobbing pop psychology as wisdom, she could make a film that lives up to its hype.