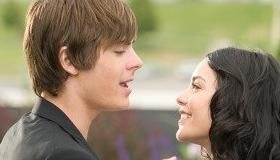 I am 29 years old and High School Musical 3: Senior Year is not a movie made for my age group. I feel an obvious fact such as this has to be stated upfront since people will likely condemn and/or defend the following review. The ones defending my trashing of the popular kids series won’t have a clue what all the fuss is about or simply won’t care. The ones calling me Satan for daring to make fun of Zac Efron and his pedestrian acting chops will most likely be 12-year-old girls. Either way, the hopeful conclusion of High School Musical 3 has all of the series’ familiar faces take their exaggerated adventures to the big screen for the first time. Because of the built-in audience and screaming tween-aged fans, High School Musical 3 is almost guaranteed to make a boatload of money at the box office, no thanks to clueless critics like me.

Zac Efron. Vanessa Hudgens. Ashley Tisdale. Corbin Bleu. If these names mean anything special to you and you’re over 18, there’s a good chance you’re not in high school and a better chance you’re a fan of bad musicals—two things this movie wears like a badge of honor. Efron, who headlines the ensemble cast, is 21 but is playing an 18-year-old high school senior. It’s not the end of the world, older actors have been doing this for ages. But when Efron follows in the monotone footsteps of Freddie Prinze Jr. (another twentysomething used to playing high school seniors back in the day), it’s not a good sign. Ditto the film’s cheesy one-note plot revolving around a group of friends dealing with their last year in high school while planning for college, dating and—yes— putting on a musical. Most of the film is set in a fantasy world that doesn’t resemble reality in the slightest—but that may be the point. After all, the High School Musical series started out on television and received acclaim through the acceptance of young and giddy teenage girls. The last time I checked, I was an old and jaded male. Big difference.

I’m not completely out of touch with High School Musical 3 : I know there’s an audience for popcorn fluff where cardboard characters say the most clichéd things and only make things worse when they literally stop mid-sentence to break out into a painful song and dance. Will Troy (Efron) and Gabriella (Hudgens) stay together even though she has a scholarship to Stanford and he can barely graduate? Will Sharpay (Tisdale) get over herself and realize that bratty blondes like her are a dime a dozen in the real world? Will Chad (Bleu) realize that his hairdo looks like a box of curly fries? Trying to answer these silly questions might help you pass the time during this mess of a movie.

If you’re a fan of the series and are planning on seeing High School Musical 3, I won’t stop you. I’ll confess that I was the only one in the theatre not screaming my head off when Efron appeared onscreen. I’m very proud of that fact, but others might disagree. On the other hand, if you have no interest in this piece of pop entertainment, I can’t urge you enough to stay as far away as possible. The swarms of young girls watching this phenomenon opening weekend will eat you alive.