close
This horror flick is barely worth digging up 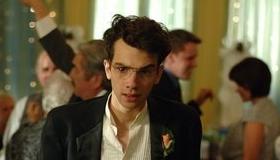 In Just Buried, writer/director Chaz Thorne splices the horror genre with some calculated plucks of oddity. But the edges in this tapestry are too frayed, and Thorne doesn’t deliver the kind of plateaus he hoped. Instead, the ditty about a bashful son who inherits a failed funeral parlor from his alienated old man and turns a sick (literally) profit has legs in the beginning, but a half-hour in, you see up close the thinly stacked goods and feel gypped. What could have been a clever stroll through some quirky bits and subtleties almost completely sinks six feet under. The play on the gore flick should merit a solid showing by the base who just can’t get enough of the things you can do with ketchup and spirit gum.

You wouldn’t go into major surgery with a dilettante whose logged hours in the operating room could be compared to the time it takes to nuke your Salisbury steak. The same goes taking a cinematic tour with a guide who is a bit unsteady when it comes to the delicate balance of manipulating strange ideas with more strange. It all looks good on paper, but not necessarily once the scenes are shot (and perhaps should have been re-shot). Take the lead, Oliver Whynacht (Jay Baruchel), who took too many cues from Igor’s gimp persona in Young Frankenstein. He’s a bespectacled geek, and his brother is a priest. Together, they make the pilgrimage to the small Canadian hamlet to attend their dad’s funeral and try to sway their blonde-siren-dressed-in-a-negligee stepmother that they are there for the right reasons. Whynacht is somewhat hopeless—always getting a nosebleed when the anxiety knob is turned up. But somehow, he manages to take his weaknesses and thrust them into strengths for he beds just about every living female (including his widowed stepmom) in the film many times over.

Whynacht’s necrophiliac gal pal is a mortician named Roberta Knickle (Rose Byrne) who’s hellbent on stirring-up mischief. Byrne’s character saves the film from one too many nosebleeds and gives the story’s setup some proper chills. I wouldn’t go so far as to suggest the hairs on the back of the neck will go into rigor mortis, but there is something suggestive about her sexy whiff blended with danger. Whynacht inherits the death business that has not seen the likes of a stiff for years until his dad bit the dust. They’re in the red, and luckily for the three-man band (there’s a wise curmudgeon named Henry Sansipass played nicely by Graham Greene), business picks-up. It’s too good.

As the town begins to see a constant fill of convenient accidents—a Swiss hiker gets plowed down, a local peeping tom gets an eyeful, the constables are rubbed out. Lawlessness runs rampant. Without fail, anybody that’s a principal is surely going to face the prospect of getting written off. When a rakish funeral rival comes mudslinging, Whynacht and his squeeze Knickle concoct a way to successfully maneuver a monopoly in town. Soon enough there’s not many characters left standing, so Thorne has no other hand to play but off the main suspects. Nobody’s safe.

The picture pulls together the basics. Grim murders? Check. Sex scenes? Check. Necking in a coffin? Check. All of the stuff is thrown through a top-of-the-line meat grinder. It’s shot nicely and slickly cut together. The score of the film has more of a feel of a continuous opening montage on a college campus where the law student is running through the quad, late for his ethics lecture. It’s too giddy and played-up. The music tends to overpower the scenes; when there is supposed to be black humor, it becomes quite gray. For his own part, Thorne shows restraint by holding back on the blatant nudity from the film so that there is some taste in the sex scenes.

All in all, the effort here is an hour and change of material that you can take your eye off for a few minutes and still not miss much. The characters are not that distinct despite the fact that Whynacht’s brother Jackie (Sergio DiZio) is a priest and you never get much out of this besides seeing him wear the white collar and give a quick sermon honoring his dad. The hand’s been down this bag of chips before. And it came out oily and with only a handful of crumbs. This type of filmmaking takes some mastery and timing, and however breezy and fun at times the film is, it still is not going to nourish the psyche with much.